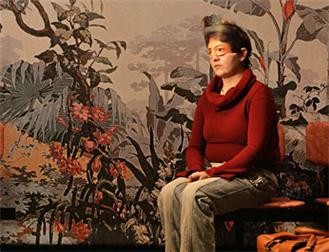 Audience as Subject is a two-part exhibition that reverses the role of the audience from that of spectator to subject, exposing the dramatic mechanisms underlying public gatherings of people. By focusing the viewer's attention on the characteristics and behaviors of individuals in a group environment – body language, facial expressions, attitudes, gestures and actions – the artists challenge our perceptions about participation in civic life. They reveal what we collectively become when we gather together to participate in a common experience and and investigate the effect this process has on our individuality. The two parts of the exhibition will take place at YBCA over a period of approximately two years. Part 1 explores medium-sized audiences in such venues as concert halls, theaters and lecture halls. Part 2 examines the differences between large audiences, such as those attending sporting events, political rallies and outdoor performances, with audiences for smaller, more intimate events, including television viewing and computer interaction.

Part 1: Medium
The collaborative team of caraballo-farman present Venerations (Applause 3), 2009/2010, an installation in which hundreds of clips of audiences applauding in TV studios for live talk shows are shown continuously on multiple video screens surrounding the viewer. The artists' work traces the convergence of religion, entertainment and politics when individuals who make up an audience bond beyond reason to produce shared emotional states and spontaneous rituals.

Stefan Constantinescu’s film, Troleibuzul 92 (2009), features a man on a trolley bus making several phone calls to his wife or girlfriend, often threatening her in an abusive manner, in view of the other passengers, who become an unwilling audience. The work examines how actions and behavior that take place in the public realm, and the "theatricalization" of social practices, affect viewers' experience and their reaction to it.

For her video installation Isola Bella (2007-2008), Danica Dakić works within the framing device of a theatrical setting, instructing non-actors selected from the audience to tell their life stories, using classical forms of storytelling. Staged in front of an elaborate 19th-century wallpaper backdrop, the actors, residents of the Home for the Protection of Children and Youth near Sarajevo, relate incidents from their own lives, often referencing the trauma of war, with their faces hidden behind fanciful masks.

For Adrian Paci, the main factor that binds groups together is cultural identity, symbolized by participation in common actions that become the mechanisms for the socialization of individuals. Shot in Shkoder, Albania, the artist's birth city, the video Turn On (2004) features middle-aged Albanian workers as they transition from a day of laboring to sitting together on the steps of the town square.

Shizu Saldamando's portraits focus on individual style, identity and group dynamics at social events, especially those featuring pop culture. She will create a new work for this exhibition based on the audiences that come to YBCA.

Gabriel Acevedo Velarde is interested in how the collective processes of leftist politics interact with individuals confronted with violence perpetrated by militarist arms of government. In his animations, the stage is a place where the populace needs to either declare its strength in numbers through participation in a chorus, or expose their vulnerability through individual voices.

Ulla Von Brandenburg's work centers on the exploration of theater as a construct and the boundaries between audience and actors, subject and object, reality and illusion. She draws on different cultural and historical references, as well as older conventions of representation to create layered, symbolic, codified narratives that explore patterns of behavior and enigmatic ritual. For her wall painting, Publikum (Audience) (2008) Von Brandenburg's depiction of a theater audience staring at the stage hovers between illusion and spector as a mirror effect between the image and the viewer.

Adrian Paci creates artwork that addresses shifting regimes and cultural flux. He originally trained as a classical painter in his native Albania, but civil war forced him to relocate to Italy in 1997. Since that time, he has been working with video, photography, and sculpture to examine the desolation of displacement and to commemorate both the traditions and the struggles of his country.
www.ybca.org