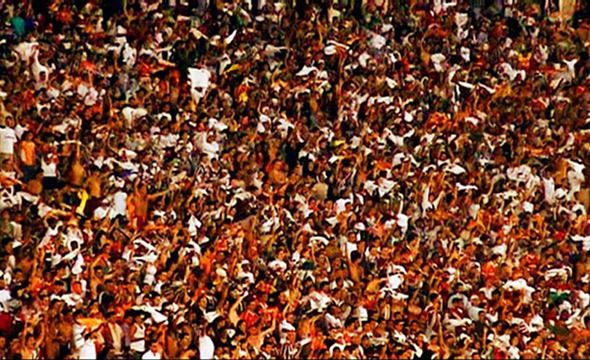 The rock band on the stage, the athlete on the soccer field, the politician at the podium — all command the attention of huge crowds, not to mention cameras. Audience as Subject, Part 2: Extra Large turns the lens back on the audience, exposing the dramatic and narrative potential of the crowd itself.

Audience as Subject is a two-part exhibition that explores the shift in our perception of the audience member from that of spectator to that of subject. These works of photography, video and other media comment on the larger changes in contemporary ideas about participation in public life. The real-life gatherings they depict are set against new ways of thinking about social interaction in an age when virtual worlds, electronic friendship and texting have changed the ways that we participate in communities of like-minded people with similar interests, cultural affiliations, and political leanings.

The artists in Part 2: Extra Large represent how audiences look, how they behave and where they gather, as one way of understanding the attraction that being among others has had in recent years. They examine the behavior of the individuals that make up the collective — their body language, facial expressions, attitudes, gestures, actions and energy — through drawing, painting, photography, and video. These images explore the ways we perform the roles of spectator and fan, and uncover our fervent desire to take part in shared experiences on a massive scale. They challenge our perceptions about participation in public life as they reveal what we collectively become when we gather together.