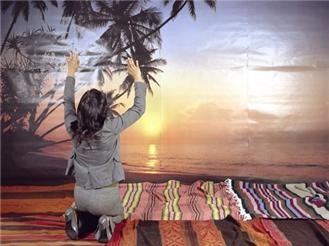 The Galleon Trade: Bay Area Now 5 Edition, guest-curated by Jenifer Wofford is a collaborative project that builds international bridges between the Bay Area and other cities on the globe through a process of exchange and dialog. Taking the historic Acapulco-Manila galleon route as a metaphor of origin, the Galleon Trade exhibitions seek to create new routes of cultural exchange along old routes of commerce and trade. Galleon Trade I brought work by twelve California artists to three galleries in Metro Manila, Philippines in summer 2007. Galleon Trade: Bay Area Now 5 Edition addresses the deeply transnational ties between the Bay Area and the Philippines by pairing artists from both places. It features work by local artists Jaime Cortez, Megan Wilson, Johanna Poethig, Gina Osterloh and Christine Wong Yap, all of whom went to Manila with the project in 2007, and met many local artists. Their work is in conversation with the work of five artists from Manila: Poklong Anading, Norberto Roldan, Maria Taniguchi, Yason Banal, and MM Yu.

Galleon Trade is entirely about reciprocity and gathering momentum to create a viable new map that other grass-roots international arts alliances and exchanges can trace.