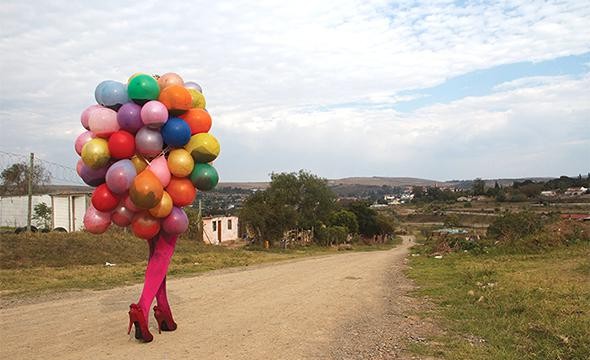 Public Intimacy focuses on the ways that artists have explored interpersonal relationships, encounters, and exchange in everyday social life in South Africa. Initially formed from a consideration of South African photography in the San Francisco Museum of Modern Art collection, the exhibition, curated by both institutions, also includes works in painting, print-making, sculpture, media arts, graphic design, plus a series of integral live art projects.

Public Intimacy focuses primarily on works that have been produced in the last five years, but also contains some historical works, including approximately 25 photographs shown in SFMOMA’s exhibition South Africa in Apartheid and After: David Goldblatt, Ernest Cole, Billy Monk (Dec 2012 - Mar 2013). Differentiating itself from the exhibitions such as South Africa in Apartheid and After and The Rise and Fall of Apartheid: Photography and the Bureaucracy of Everyday Life (International Center of Photography, New York, Sep 2012 - Jan 2013), which exposed how apartheid prohibitions such as the Group Areas Act controlling inter-social movement, and the Immorality Act controlling interpersonal association governed the conditions for public intimacy in the past, Public Intimacy explores how those conditions are and have been changing.

This exhibition aims to identify new directions in recent South African art practice; many artists making work in the past five years are interpreting social and political conditions in more personal, muted or indirect ways than was often the case during the period of great national optimism that immediately followed the ending of apartheid. Many of them are younger artists who have grown up only under the current conditions. Yet this contemporary tendency is prefigured in the work of an older generation of photographers, such as David Goldblatt and Santu Mofokeng, who approached issues of interpersonal relationships with a similarly discreet, often poetic, sensibility.

Public Intimacy also includes a publication and a symposium on “visual activism” affiliated with the third biennial conference of the International Association for Visual Culture.