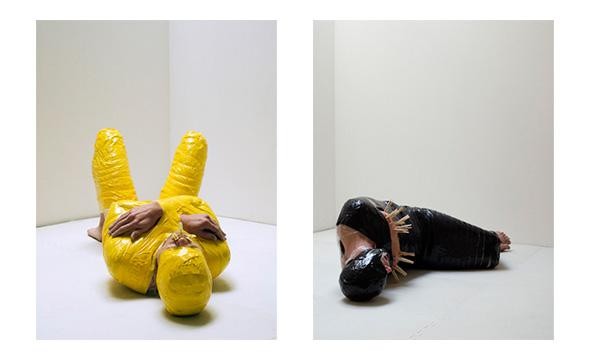 Want.Here.You.Now is the latest installation in YBCA’s open-to-the-community art space, the Room for Big Ideas. It features works of art by Kenneth Lo, Ana Teresa Fernandez, and Jennifer Locke in the mediums of light, video, sculpture, photo, and text. These artists explore our complex and often fragmented connections to others, and each piece offers an interactive experience paired with unexpected media, in a combined effort to begin to uncover what we lose and gain as we move through our lives.

Ana Teresa Fernandez’s installation, FIND, presents an abstracted reflection of truth: fragmented and multi-faceted particles of reflections that reveal to us our surroundings.

Kenneth Lo presents his latest monument to one of several of his latest relationships to go awry. His lightbox sculpture, with the long, borderline-TMI, title, your issues vs mine until we both explode into silence (For T. I promised bittersweet art about you in a late night drunk text I sent one week after the last time you left me. sorry if i had more fun than you did.) attempts to redeem failure with beauty, and make heartbreak look fun.

Jennifer Locke’s extremely intimate interactive piece consists of one-on-one performances that take place in YBCA visitors’ homes with only a camera as an audience. Documentation of each piece, as well as instructions about how visitors can participate, will be on display in the Room for Big Ideas.

Kenneth Lo
Kenneth Lo went to a good school, has shown in good places, has read the right books, actually does have friends, possesses charms that women can't resist, is a good liar, secretly flatters himself in the third person, and has made a bunch of really, really, really good art, but he has won zero awards. He doesn't make art to win stupid awards anyways. He makes art because he wants to make you love him, or at least to like him enough to get laid.

His work consists mostly of different kinds of memorials. Sometimes the memorials he makes are serious, and sad. Mostly they're serious, and kind of funny. Almost always they're about the people he's loved, or should have loved better, or wanted to love all night. Usually, when the work isn't admitting that of all the people he loves, he loves himself the most (all night), his work is about people he's loved and lost. Pretty much always, he loses absolutely everyone in the end—just like we all do.

Locke often creates a separation between her live actions and the audience through the use of material barriers, live video feeds, multiple camera perspectives, wireless microphones, and mini-cameras. These audio-visual reiterations produce a ripple effect, flattening, repeating, echoing, amplifying, and displacing the action by turning it—as well as the audience performing its own spectatorship—into an image of itself.