Without Reality There Is No Utopia 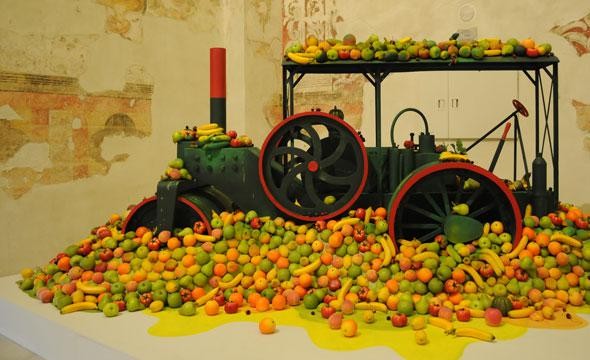 CAAC Collection (Seville, Spain)
WITHOUT REALITY THERE IS NO UTOPIA
15 February – 9 June 2013

In the Age of Information, actual reality has been supplanted by virtual reality, computer simulation, and false narratives. Since the concept of utopia is based on the improvement of reality, the disappearance of the real also signals the end of utopia. Without Reality There Is No Utopia illustrates this premise by examining false narratives that masquerade as truth; the collapse of Communism in the 1980s; the current financial crisis, which heralds the demise of Capitalism; the contradictions inherent in geopolitics; and the explosion of democratic uprisings around the world. The exhibition includes work by more than two-dozen international artists, and features works of photography, video, drawing, painting, collage, and more.

The exhibition is organized into two asymmetric sections that consider shifts in global political realities.

Description of the Lie
In this first section, the artists focus on how truth has been replaced in the media by false narratives created to hide covert operations or secret crimes. German artist Wolfgang Tillmans’ work reproduces actual false information published by the print media under the common umbrella of "the truth"; Spanish artist Dora García exposes the inner workings of the East German Stasi, which operated as a society within society; and Danish artist Lene Berg deconstructs the happy image of a free and educated society whose actions directly respond to plans laid out by the powers that be in order to ensure their supremacy.

The Collapse of Communism
This group of artists examines the conditions leading up to, and the aftermath of, the fall of Communism. Included are the works of the Russian collective Chto Delat? (Nikolay Oleynikov), which encourages the viewer to critically engage with the events that took place during the presidency of Mikhail Gorbachev that lead to the demise of the Soviet system.

The Collapse of Capitalism
This section’s focus is on the current world financial crisis, and the premise that the economic collapse was not born out of greed or irresponsibility on the part of individuals or institutions, but rather was the inevitable result of a system based on consumerism, waste and the depletion of the planet's resources. Works in this section include Daniel García Andújar’s Time Line, a chronology of events narrated through media and advertising images; and the Superflex collective’s humorous parody, The Financial Crisis, which suggests the crisis is an illness that can be cured through hypnosis.

The Geopolitical
The artists in this section question the roles of colonialism and the West on recent geopolitical uprisings. Fernando Bryce depicts colonial practices and their "civilising" discourses in his drawings. Through a collection of posters, Lebanese artist Zeina Maastri documents the civil war in Lebanon between 1975 and 1990. And Federico Guzmán’s installation illustrates how the consequences of Free Trade Agreements — a new form of global coloniality — affect the everyday practice of citizens.

Democracy
This section traces the effects of technology on communications, privacy and assembly and how they influence democracy. Among the works are Ed Hall’s banners, which depict the micro-history of recent social struggles in England; Artur Zmijewski’s photographs of demonstrations in Belfast, Berlin, the West Bank, Gaza, Warsaw and Strasbourg, collected both as playful and celebratory events; and Oliver Ressler’s interviews with philosophers, politicians, activists and concerned citizens asking What is Democracy?

Wall texts are in both English and Spanish.
www.ybca.org