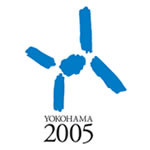 “Art Circus (Jumping from the Ordinary)”

At this, Yokohama’s second International Triennale of Contemporary Art, some 80 artists, musicians, performers, and architects from around the world are presenting their works in the main exhibition venue, located in and around these two warehouses on Yamashita Pier. Artworks and art projects of wide-ranging character will be found displayed here, each in a manner giving sensitive thought to the character of this location. Other artworks are displayed in several locations around Yokohama, also in a manner giving play to the special character of their site.

Our theme—“Art Circus: Jumping from the Ordinary.”

One might ordinarily think of an art exhibition as a place to quietly stand and contemplate artworks. For Yokohama 2005, however, given the distinctly unusual character of its location — a pair of warehouses, and these located in a “bonded district” for imported goods liable to duty — we have taken a freewheeling approach in constructing an exhibition that offers numerous different art experiences.
In theme place of a character somewhat removed from ordinary daily life, reached by passing through a circus arena set up near the entrance, viewers will enjoy encounters with artworks that seem to leap out in succession like events in a circus program. Within these encounters, we would like them to experience at close range the “jump from the ordinary” that artists make in their attainment of art expression.
Conceived as an exhibition that, like a “work-in-progress,” continually changes and grows, Yokohama 2005 will feature workshops and events of all kinds throughout its duration. Viewers may find the artworks and displays to appear different with each visit, for the accent will be on progressive change throughout the 82 days the exhibition is open.
What will change and how?
“Seeing is believing.” We hope you will visit Yokohama 2005 more than once to explore with your own senses the world of new expressive potential that contemporary artists have opened.