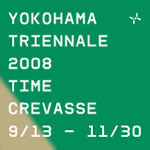 Through this major international exhibition in Yokohama, I aim to reaffirm the boundless energy that art affords us.
Art shakes up our everyday perceptions. It gives us glimpses of the "abyss" we normally fail to notice, or perhaps pretend not to notice. It can horrify us, give us courage, console us, or provide us with what we need to face life.
Art's bounty is not secured by novelty. When ancient Greek texts speak to us in a clear, familiar tone, like works penned only yesterday by our cultural peers; when music from the distant past of an unfamiliar land seems as fresh to our ears as if it had only just been composed; when we marvel at the aesthetic feats achieved at old religious sites with little or no connection to our own cultural tradition-in such moments, again and again we are reminded that being "new" is not what gives art its depth and impact.
One could say that the new/old paradigm is sustained by a rigid world view in which time is regarded as strictly linear. In the contemporary world, advanced information technology seems to be standardizing time and space to a single measure. One gets the sense, however, that this very standardization is paradoxically creating a host of schisms, and that we, perhaps more so than any other people throughout human history, are thereby being forced to live a divided, fragmented existence.
Time flows along multiple axes. But that fact is not by itself the source of cultural and artistic enrichment. What happens, rather, is that now and then different aspects of time twist, swirl, and collide with one another, creating unexpected fissures and faults through which the underlying abyss can be glimpsed.
It seems to me that art arises when we confront that abyss squarely and, by waiting attentively at the edges of what I call "time crevasses," we scrupulously register various forms of mutual differentiation—individual or social differences, differences of nationality, gender, generation, ethnicity, religion, and so on-including the particular circumstances in which we ourselves are currently situated.
A crevasse that opens up in a field of snow is a very "beautiful" sight. But at the same time, art has the power to dispel the temptation to let ourselves fall into such crevasses. It is also an act of bridging those gaps so that people can communicate and interact through them.
Yokohama is an ideal site for the building of such bridges through art because it is a comparatively young city, having opened up to the world only some 150 years ago. I sincerely hope that the third Yokohama Triennale will constitute for Yokohama an important step forward in its cultural maturation, and it is with this hope that I have chosen "Time Crevasse" as the overall theme for the exhibition.