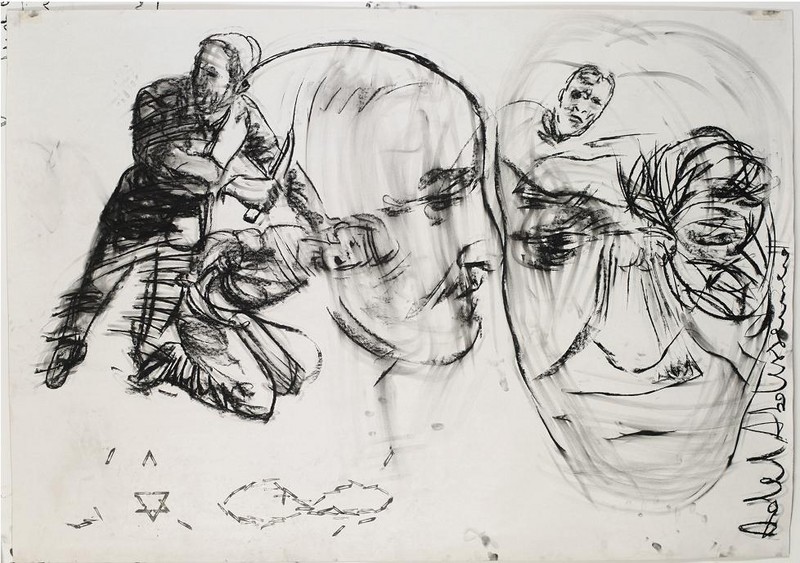 ACT had been announced. At the moment when I saw it I told myself: what a wonderful Coherence: this Sacrifice was born from Mon Enfant. So carries on Art: by itself birth, from one work to the other. It is always the same scene: the father gives to the son. Gives: death, love, freedom. Kills himself in the son. The son gives to the father: death, love, fatherhood. Yes! No! Kill! Does not say. You.”

Yvon Lambert is pleased to announce Solo, an exhibition by Adel Abdessemed, from November 22nd to December 20th, 2014, closing the 48 years of gallery programs.

This project takes its roots in the active conversation in which the artist and Yvon Lambert are engaged; it had already been made public at the beginning of 2014 with the publication of Le Livre des AA, a rare book conceived by Adel Abdessemed and Adonis.

Adel Abdessemed offers an entry into the multiplicity of the practices he adopts today: video, sculpture, drawing, painting, communicate in a dialogue between individual intimacy and human community, thereby questioning the positioning of the artist in the world – a poet, a magnificent fugitive, an imagemaker. The exhibition finds its title in the secret of that situation – the manifestation of a moment of solitude, the source of art, and at the same time the awareness to the world, to the public, to friendship, which are the other side of the singular loneliness in which the works are imagined.

In the three parts of the exhibition, the two threads of artistic existence are continuously brought together: in the hall, The Traveling players, a marble bas-relief depicting the moment when the Camp David negotiators showed their humanity by tightening the bow of their tie, as if they already symbolically hung, is confronted to the title of exhibition, made into a drawing by the artist.

In the second room, Adel Abdessemed carries on with the series of videos in which he breaks objects with his foot: with Nuance, he breaks a lamp, thereby eliminating light in the image. Around the golden filament that progressively glows and brutally disappears, an ensemble of drawings attests the energy of the artist, with black coal onto white paper, and brings the consciously unfulfilled pictures of this world and its dreams into a dance.

In the middle of the third room, Untitled presents the artist and his father, in the position of Isaac and Abraham in Caravaggio’s painting. The artist places himself in the history of men and of art, in his own history, in the history of the world in which he lives. Around that work, Diptyque, made of Belgian black marble, Landscape and Stonehenge, made of Carrara white marble, stand out as fragments of the present. In the back, Syndrome can be read as a preparation for the adventures that are to come for the artist: another sign from today’s world, displaced towards abstraction, like a motive.

The past and the present, art and politics, what is personal and what is universal, the image and the word, all meet in the exhibition, conceived as a moment of existence and community.

For Solo, Yvon Lambert will publish a fully-illustrated catalogue of the exhibition, accompanied by Double Généalogie du Sacrifice d’Adel, a new letter from Hélène Cixous to Adel Abdessemed.

In 2012, his work was the subject of a major solo exhibition at Centre Georges Pompidou in Paris, Adel Abdessemed Je suis innocent, which was accompanied by a fully illustrated catalogue published by the museum and Steidl. Also in 2012 was a special presentation at the Musée Unterlinden in Colmar, France, which displayed the artist’s Décor (2011-2012), four life-size sculptures of the crucified Jesus made entirely from razor wire, next to the actual work from which it was inspired: the Isenheim Altarpiece, painted in 1512-1516 by German artist, Matthias Grünewald. Décor is currently on view as part of Prima Materia at the Punta della Dogana in Venice (through December 31, 2014).