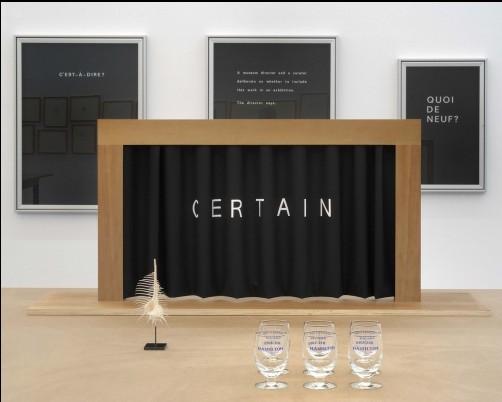 View of the exhibition
BETHAN HUWS

Yvon Lambert, Paris, is pleased to announce the first solo exhibition of Bethan Huws in France from May 24th until June 21st 2008.
Bethan Huws is born in 1961 in North Wales, she now lives and works in Paris. Huws’art contains two main thoughts: disapproval of art that is predominantly visual and the aim to make work that would focus on the gap between art and the common affairs and concerns of people.
One of the guiding principles of Huws’art is that it frequently utilizes given or found material. Each work develops in response to an actual set of circumstances: a place, or a situation, or a memory, or something read.
Her art is very attentive to nuances of voice, tonal modulation and to the other expressive modalities of language, as well as to the contingency of meaning on context, to the difference between speech and writing, and, ultimately, to all that constitutes us as individuals.

Watercolours
Generally, throughout her career, Bethan has made watercolour drawings. In virtually all of the watercolours the figures are suspended in a blank field; the colour is dilute; and the figures are finely described yet equally schematic. The overall effect is of dual concreteness and abstractness. The spatial implication of the drawings is crucial to their being, to their coming into being and to their consistency.

Word Vitrines
The Word Vitrines are anonymous statements, some of which are based on found mateiral or on real situations, some of which are invented and propositional. The Word Vitrines’ statements generally coordinate poetic invention and banal utterance. The format itself is a standard, preexisting one whose beauty resides in its simplicity, flexibility and intrinsic emptiness. It, much like art, is little else than a vessel that we fill with significance, yet even, its nondescript character (and even that of ‘art’ as an empty universal, category), is not without significance. By transposing this banal format from a commercial/utilitarian context into the sphere of art the inherent formal elegance and strangeness of the format become apparent.

Readymades
True to the unprecedented category of artworks invented by Marcel Duchamp, Bethan Huws’ ‘readymades’ are found utilitarian objects that unleash unforeseen (poetic) meaning through simple recontextualisation. The punning relation of title and image, or of forms is the crux of the ironic consistency of these ambiguously resituated objects. Often, as with Duchamp’s art, these puns and jokes have philosophical implications.

The Chocolate Bar
The Chocolate Bar is a short film and a farcical conceit with satirical overtones. The initial scene of the film, shot in black/white, and set in a cellar (ergo, the unconscious) represents an irrational dream sequence. It begins with a ludicrous, nonsensical dialogue about a Mars bar between two almost identical protagonists. Various elements drawn from the art of Marcel Duchamp make an appearance: a Bottle Rack and an androgynous man descending a staircase dressed in a traditional woman’s costume, that is capped by a traditional, Welsh, male’s, large-brimmed hat. This figure is outlandish in appearance. He/She is one of three clonal protagonists all played by the same actor. The dialogue revolves around a chocolate bar, puns on the word ‘Mars’ and ‘bar’ and nonsensical misunderstandings between the interlocutors. The strange object in the background, suspended in space like a UFO (Unidentified ‘Floating’ Object), is Duchamp’s Bottle Rack. A close-up dissolving, blurred image of this object transitions between the two parts of the film – the dream sequence in the basement and the remainder of the film, located outdoors and filmed in colour. Another blurred close-up detail of the Bottle Rack opens the film and is followed immediately by the film’s title appearance on the screen. Thus the Bottle Rack occupies doubly critical places in the film and so presents itself as its key. It imputably signals the film’s (and art’s) propositional condition and its mediating status between thought and reality. In the context of consumerist, capitalist driven, materialist culture, whose standard fare is ‘reality’ TV and film, the final scene from The Chocolate Bar could be taken as an anodyne spoof of Hollywood’s spectacle fetish, which caters to ignorance, indulges anti-social behaviour and amounts to little more than grotesquely ‘naïve’ realism devoid of any capacity for reflexive thought. The Chocolate Bar’s multivocality and irony represent the complete negation of that.

Bethan Huws is currently in residence at DAAD, Berlin ; she has already exhibited at the University Gallery, University of Massachussetts, Ahmerst, the Kunstmuseum in St Gallen, K21 in Dusseldorf, the Bonnefantenmuseum in Maastricht, the Tate Modern, the Düsseldorf Kunsthalle, the Henry Moore Institute, Leeds, the Bern Kunsthalle et will have an exhibition next year the Museum Serralves, Porto.
www.yvon-lambert.com