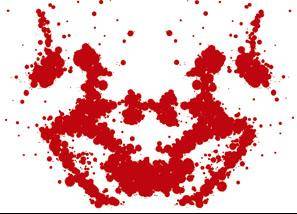 Yvon Lambert is pleased to announce the third solo exhibition with Carlos Amorales. This artist’s first exhibition at Yvon Lambert Paris, titled A Stage For An Imaginary Friend, was held from March 29 to April 24, 2003. The first solo exhibition of Amorales at Yvon Lambert New York, entitled The Bad Sleep Well, was held in September 2003 on the occasion of the opening of the gallery.
The current exhibition Broken Animals traces a thematic line with the previous exhibitions realized by the artist at Yvon Lambert Paris and New York in 2003 and now in MUCA in Mexico City, where he began an investigation into the meaning of fantasy and horror in the contemporary world by using drawing, graphics and animation as media.
Since those earlier pieces Carlos Amorales has organized an archive of digital vector drawings which are based in photographs that range from personal sources to political and popular iconography. These images are synthesized into ambiguous forms that combine silhouettes with traces that later are used to form the sequences of his animation films.
Broken Animals is the result of building up an animation studio in Mexico City to explore the possibilities of the before mentioned archive, where the animation films and the art works are made through a collective effort that includes the participation of draughtsmen, motion graphic designers, media researchers and a musician. The animation studio has been organized in a form where beyond mere visual production there is an emphasize on formal and thematic analysis by a monthly seminar with guests and a weekly film club.
Broken Animals as an animation studio means the conscious pauperization of Walt Disney Studios as an effort to redirect the understanding of fantasy towards obscurity, where the effect of the fantastic can stimulate questions (as thought as well as emotion) in the audience, without giving it answers.
In the spaces of the main gallery Amorales will present a new serie of drawings : Black Drawings Series as well as his new animation video : Useless Wonder. His latest installation : Broken Animals will be installed in the largest gallery space.
The exhibition continues in the gallery’s project spaces; the animation video Manimal, 2005, will be presented in the Studio, and new vinyl works will be installed in the Project Room.
www.yvon-lambert.com