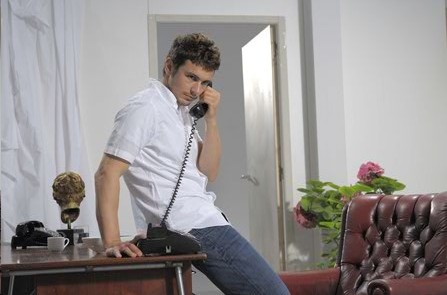 Yvon Lambert Paris is pleased to announce itsfirst solo exhibition of American artist Carter.The exhibition will take place from October 21stthrough December 6th. For this exhibition Carterhas created all new works including two 16 mmfilms, sculptures and paintings. The exhibitionwill open on October 21st with a reception for theartist from 6 to 9pm.

Carter (born 1970) has exhibited at the RoyalAcademy of Arts in London as part of theexhibition USA Today, White Columns in NewYork and the University of Illinois in Chicago.He was also selected for the 2006 WhitneyBiennial Day For Night and was chosen bycurator Matthew Higgs for inclusion in theexhibition Dereconstruction at BarbaraGladstone in New York.

Constant (James Franco as inanimate object) is a 16 mm color film with two sequence shots. Thefirst shot is of a leg, almost an exact replica of American artist Robert Gober’s leg sculptures,while the second shows American actor James Franco (famous for his roles in such films asJames Dean, Pineapple Express and the Spider-Man franchise) lying on the floor with whatappears to be an amputated leg. These two shots represent one scene separated by a wall. A greatadmirer of Gober, it is the artist’s response to wondering what might be happening on the otherside of a "wall". Accompanying the films are leg sculptures that the artist has made from castscreated directly from Franco’s legs.

Erased James Franco is a 65 minute color film made at Yvon Lambert Paris in July 2008. Forthe film Carter approached Franco about reenacting scenes from previous films in his oeuvre butto revisit these scenes with restraint. At no point is Franco given the opportunity to delve deeplyinto any one character. Instead Carter directs Franco to use a flat voice and limit his instinctualmovement during the filming of each scene. Carter describes his direction as “artificially relaxed- to withhold James' natural ability to act ...” which gives the film a muted quality.

Together the artist and actor constructed a performance that had more levels than simple mimeticacting, enhanced by the idea that scenes were performed one after the other, often in the sametake. This succession of characters leaves the viewer with a sense of oncoming schizophrenia.During the filming Franco is reliving multiple past identities, something that the actor describesin later interviews as giving him real ownership over those characters. To further deepen theperformance Carter directs Franco to play the role of actress Julianne Moore in the Todd Haynesfilm, Safe and as the closeted, gay actor Rock Hudson in his roll from the 1966 film Seconds.Both films have been described as psychological dramas whose themes are erasure and loss of identity.

The title of Carter's film comes from Erased De Kooning by Robert Rauschenberg and followsthe same concept of re-living something by deleting it. The film is a building up and a tearingdown of Franco’s career up until this point and through an amalgamation of past performances,the artist creates a new and jarring narrative.
www.yvon-lambert.com