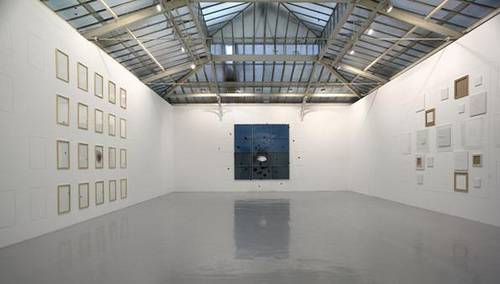 Marian Goodman and Yvon Lambert are pleased to announce a multi-venue exhibition of work by Giulio Paolini organized in their respective galleries in both Paris and New York. The exhibition, opening Thursday, December 14, 2006, in both Paris and New York, features sixteen new works by the artist. For the occasion, Giulio Paolini has been asked to play the role of “anonymous” curator of the four different exhibitions to be held in each of the four separate venues over the same period of time. Each of the sixteen pieces shown in the four different sites corresponds to the remaining fifteen pieces, which together make up the entire project.
The title of the exhibition knowingly echoes Balzac’s famous story Le Chef-d’oeuvre inconnu (The Unknown Masterpiece); as stated by the artist in September 2006, Paolini wishes for “these humble and imprudent intentions of mine to fall into complementary and symmetric line. I refer, in particular, to the part of the story where Frenhofer, the elderly painter and the main character, cannot help intervening and making the necessary corrections, giving the final touch to the picture (not his but one by another painter, his friend and colleague Porbus) so that the work is remedied and can come to a successful conclusion.”
“This passage clearly shows that a work does not belong to one artist or another; it possesses an autonomous and independent identity of its own and so existed before the painter stepped in, required only to confirm its legitimate existence. It is the work that guides the painter’s hand, appropriating the artist (an unknown artist) and not vice versa.”
Paolini goes on to note, “As I have previously said and repeated, an exhibition is not the result, the sum total of a work phase or an anthology of works selected and gathered for the occasion. It is—and I would rather speak of the exhibition moment—a display of the work that, on that particular occasion, together form a sort of text, a picture story.” A conceptual artist who works in multi-media installation and collage, Giulio Paolini is best known as an original member of the Arte Povera movement in Italy. Paolini’s work has been featured in several Venice Biennale and Documenta exhibitions.
www.yvon-lambert.com