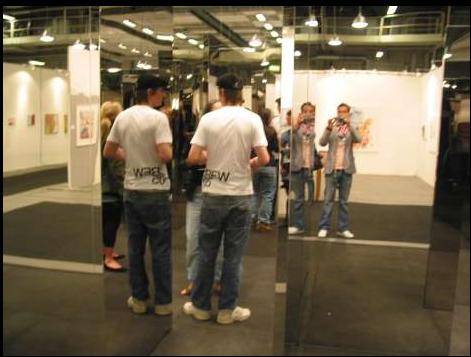 Yvon Lambert is happy to announce the first solo exhibition of Jeppe Hein at the gallery from December 10, 2005 to January 28, 2006.
This show will continue on the theme of the labyrinth, an echo of Hein’s recent exhibition at L’Espace 315 at the Pompidou Center. For this show the artist created an invisible labyrinth, a work which revisits, in a playful fashion, the dematerialization of the work of art – a characteristic of Minimalism.

Geometrical or pared-down objects or discrete installations, Jeppe Hein’s interventions fall within the continuum of the Minimalist sculpture tradition, while at the same time doing the opposite by establishing an incongruous dialogue between artworks and viewers. Hein’s work, which approaches an architectural reflection, show the modularity of space, by constructing it and by deconstructing it. Jeppe Hein’s installations, always linked to the situation in space, disturb the environment and the relationship to it. They rest on the principle that the viewer can modify them or, on the other hand, they become animated only in the absence of the public.

For the exhibition at Yvon Lambert, Jeppe Hein is using the large space in the gallery to create a labyrinth with mirrors. Visitor is invited to wander within these mirrored walls and experiment with loosing himself in this maze which distorts the vision and the space.

Born in 1974 in Copenhagen, Jeppe Hein studied at the Royal Academy of Arts in his home city and at the Hochschule für Bildende Künste in Frankfurt. He lives and works in Berlin. He participated in the Venice Biennale in 2003 and in 2004 at the exhibition Flying Cube (group show), P.S.1. MoMA, New York, U.S.A.