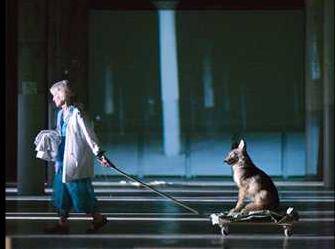 Yvon Lambert is pleased to announce the first solo exhibition of Joan Jonas in Paris. Jonas’ previous exhibition with the gallery, titled Moving in Place 1976-2005, was held at Yvon Lambert New York from January 8- February 26, 2005. An installation based on the performance, Mirage (1976), as well as the installations Woman in the Well (1976/2005) and My New Theater (2001/2005) were presented during this exhibition.
The current exhibition is an installation based on Jonas’ most recent performance, The Shape, the Scent, the Feel of Things, presented at Dia:Beacon (New York, U.S.A.) in October, 2005. The performance is a response to German art historian Aby Warburg’s essay about his visit to the American Southwest. It also featured live performances by the jazz musician, Jason Moran, who composed new music for this collaborative work. The performance was exhibited as an installation at the Renaissance Society (Chicago, Illinois, U.S.A) and at the John Hansard Gallery (Southhampton, U.K.) in 2004 as a new work in progress.
Acclaimed multi-media and performance artist Joan Jonas was a central figure in the performance art movement of the late-1960s and early-1970s. Key early works examine space and perceptual phenomena, merging elements of dance, Japanese Noh and Kabuki-theater, drawing, and sculpture. In these solo performances, Jonas developed an emblematic vocabulary synthesizing ritualized gestures and symbolic objects, including masks, costumes, and mirrors. Jonas began using video in performance in Organic Honey's Visual Telepathy (1972), incorporating live cameras and monitors as a means of transforming and layering images, space and time.
Her performance-based videos include the influential Vertical Roll (1972), which explores female identity. An interrupted electronic signal - or "vertical roll" – is used as a formal device that dislocates space and fractures the recorded image. Jonas' films from the late-1960s and early-1970s extend her enigmatic language of gesture, drawing, and objects. Her recent work - installations, performance, and photographs - continues her signature inquiry into theatricality and ritual. Jonas received the 3rd Annual Polaroid Video Art Award in 1987 and the American Film Institute's Maya Deren Award in 1988.
Joan Jonas was born in 1936 in New York, where she lives and works. She has participated in Documenta 6 (1977), Documenta 7 (1982), and Documenta 11 (2001) in Kassel, Germany. Her work has been featured in critical group exhibitions such as Video/Performance: Open Ends at the Museum of Modern Art (New York, U.S.A.) in 2000; Into the Light: The Projected and Interactive Image in American Art at the Whitney Museum of American Art (New York, U.S.A.) in 2001-2002; and Reconsidering the Object of Arts: 1965-1975 at the Museum of Contemporary Arts, Los Angeles (California, U.S.A.) in 1995. Lines in the Sand (2000), co-produced by Documenta 11, traveled to international venues such as the Center for Arts, Mexico City (Mexico), Taipei Biennal (Taiwan), The Kitchen (New York, U.S.A.), Norton Museum of Art (Florida, U.S.A.), and Tate Modern (London, U.K.). Major surveys of Jonas’ work have been presented at University Art Museum, University of California, Berkeley (U.S.A.) in 1980, Stedelijk Museum (Amsterdam, The Netherlands) in 1994, Galerie de Stadt (Stuttgart, Germany) in 2000, and Queens Museum of Art (New York, U.S.A.) in 2004.