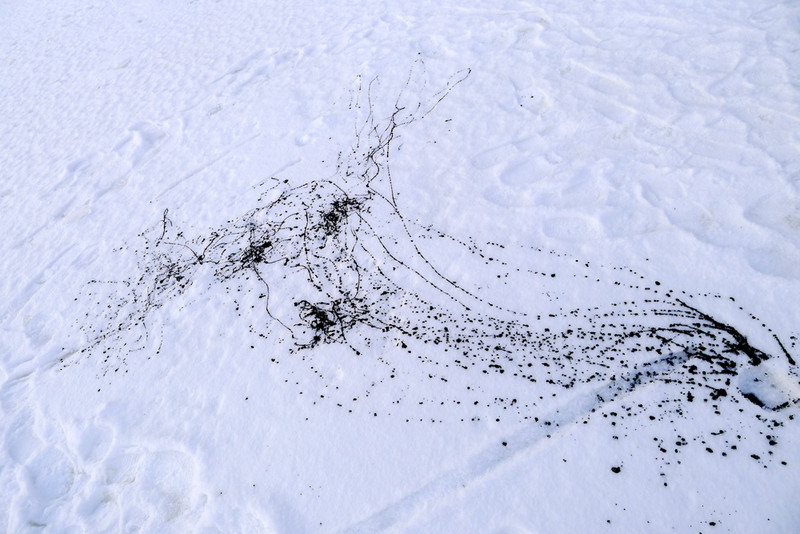 The Galerie Yvon Lambert is pleased to announce an exhibition dedicated to American artist Joan Jonas, one of the pioneers of performance and video. Jonas’s 40-year body of work has been and continues to be internationally influential. This is Joan Jonas’s third solo exhibition at the Galerie Yvon Lambert in Paris, following those at Galerie Yvon Lambert New York in 2005, 2007, and 2010.
For this exhibition Jonas presents Reanimation II, which is a variation of a project she began to develop in 2010 and was shown for the first time in its finished form at dOCUMENTA (13), Kassel, in 2012 in a pre-fabricated house in the Karlsaue Park. Jonas had been working on this project for two years prior, beginning in 2010. The entire work is based on the novel Under the Glacier by Icelandic writer Halldór Laxness, published in the 1960s. As Jonas says, the book “is partly an homage to spiritual aspects of nature, focusing on a particular glacier, but as glaciers are now melting the work Reanimation reflects this present-day situation.”
For dOCUMENTA (13), curator Carolyn Christov-Bakargiev gave a group of artists the choice of working with pre-fabricated houses in the Karlsaue Park. After choosing a house from a catalogue, Jonas removed its internal walls and reconfigured the windows through which her video elements could be viewed to create Reanimation (In a Meadow). The audience could not enter the house.
Jonas used her My New Theater structures to present three of her videos in three of the windows of the house: Glacier, 2010 (in two parts that were featured in two of the windows) and Fish, 2012 (in the third window). To create the Glacier video element, Jonas had also intercut scenes from two earlier works, Disturbances, 1973, and The Shape, the Scent the Feel of Things, 2005-2006.