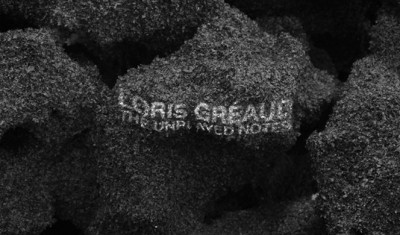 Yvon Lambert is pleased to announce The Unplayed Notes by Loris Gréaud. This will be the first solo show by the artist in the six years he has worked with the gallery.
For more than 10 years Loris Gréaud seeks to draw his own path on the international contemporary art scene.
His works are demanding, and the projects alone become the final authority. Never didactic yet drawn from all fields of knowledge, the works’ multi disciplinary nature produce unique, long-term experiences that linger in their complexities.
A large body of work produced specifically for this exhibition is deployed throughout the entire space of the gallery: the result of experiments in both science and alchemy. An intricate web of sculpted glass stretches across the gallery, fused from the sand once sifting to signify the passage of time. Locks from Le Pont des Arts, a symbol of enduring love and engagement, are severed and reconfigured into strange sculptures. Paintings invoking the dark and lonely image of the lunar surface hang as experiments in reincarnation, made from the burned remnants of past works by the artist. Further exploring the phenomena of the universe, original comics from the Adventures of Tom Sawyer are morphed as falling meteorites.
Much of the silent melody between The Unplayed Notes is concerned with transferring and mutation of materials, of laws, and of meaning. However, Gréaud is also concerned with the production of new images. Impossible, a film made in collaboration with Brown University, depicts a bat attempting to fly against the current of a wind tunnel. Confronted by the camera, the ultra rapid motion of the bat is trapped somewhere between stillness and flight. Capturing the light between excessive motion and flirting with bodily orgasm, Gréaud creates a thrilling domestic jungle to measure the frequency of our thought.
The Unplayed Notes is an experience that travels to discover the true place of the project in the tiny gap between two movements, two works, two dialogues or two chains of thoughts, "a place and time which may be specified in listening to the notes not played much more than those of the simple melody ".