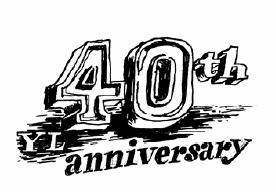 Yvon Lambert and all of his team are happy to announce this year the 40th anniversary of the gallery. This birthday will be celebrated with important solo and group exhibitions in the New York and Paris galleries The first large exhibition in this cycle takes place in Paris, from March 18th to April 22nd, and reunites for the first time in 40 years all of the artists who have been associated with the gallery. This wide spread assembly of new works in the form of personal messages by artists who have marked the gallery’s history since the 60s, On Kawara, Sol LeWitt, Richart Tuttle, Cy Twombly, Lawrence Weiner, as well as a younger generation of artists who have contributed more recently to the gallery’s make up ; Mircea Cantor, Douglas Gordon, Koo Jeong-A, Jonathan Monk, (...)
In 1966 Yvon Lambert opened his first Parisian gallery on the rue de L’Échaudé where he exhibited a great many american artists, Carl Andre, Robert Barry, Sol LeWitt, Richard Long, Brice Marden, Robert Ryman, Tony Smith, Richart Tuttle, Cy Twombly, Lawrence Weiner, (...), the tenants of Conceptual, Minimalist and land art, as well as Daniel Buren, Gordon Matta-Clark, Dennis Oppenheim, Giulio Paolini, Niele Toroni, (...) In 1977 he left the 6th arrondissement for the Marais, rue du Grenier St Lazare, where he exhibited Miquel Barceló, Joseph Beuys, Jean-Charles Blais, Louise Lawler, Allan McColllum, (...) In 1986 he moved again to the magnificent glass-roofed space on rue Vieille du Temple where he affirmed strong relationships with artists including Nan Goldin, Jenny Holzer, Joan Jonas, Anselm Kiefer, Thierry Kuntzel, Matthieu Laurette, Claude Lévêque, Glenn Ligon, (...) In 2003 Yvon Lambert consolidated his international position with the opening of a second gallery in Chelsea, New York, after having set up in the Hôtel de Caumont, Avignon in 2000 the Collection Lambert en Avignon, which stands today as an assembly of more than 500 art works by contemporary artists.
Eminent gallerist, avid collector, Yvon Lambert also noursishes his passion for books. Since 1992 he has been editing special limited edition books. Today this collection amounts to about fifteen books, each one made by a different artist. The list includes Louise Bourgeois, Jenny Holzer, Richard Tuttle, Giulio Paolini, Anselm Kiefer, On Kawara ...
Despite forty years in the profession, Yvon Lambert works with the same enthusiasm that he has had from the outset. In 2001 he opened Le Studio, a space devoted only to video art, a bookshop specialised in contemporary art, a Project Room with a program for artists not represented by the gallery, and a Media Library, which offers to the public interviews of artists made for the opening of each exhibition at the gallery, as well as a selection of video works by artists represented by the gallery.
The exhibition Message Personnel groups a series of photographs by Douglas Gordon, a Date Painting by On Kawara, a painting by Robert Mangold, a neon by Jonathan Monk, a lightbox by David Claerbout, paintings by Adam Pendleton, a text piece by Lawrence Weiner, as well as a collection of personal messages from artists and friends of the gallery directed to Yvon Lambert.
www.yvon-lambert.com