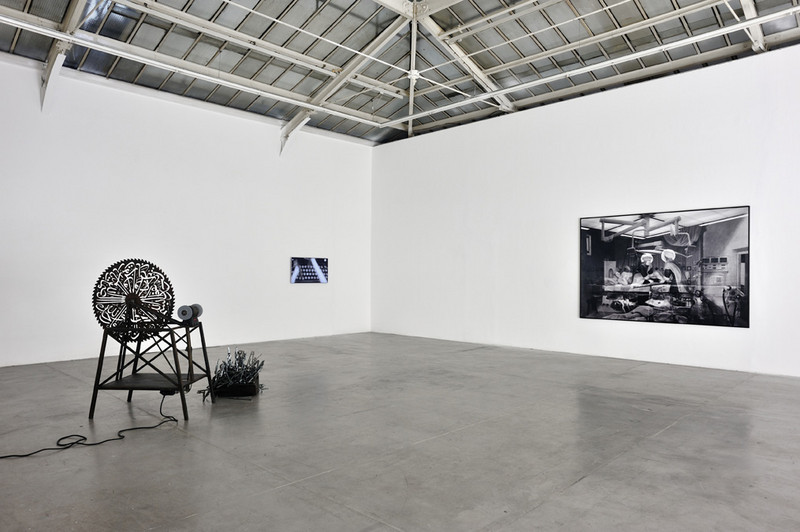 Yvon Lambert is pleased to announce They were blind, they only saw images, the first exhibition of mounir fatmi which will be held at the gallery from January 30th to March 8th 2014. For this occasion, the Moroccan artist will present a series of new works questioning through identity and controversy the paradoxes of representations of the Sacred. By media, as installation, video, prints or performance, mounir fatmi continues his exploration of different types of language from mystical texts of Sufism, essays of Spinoza or the controversial writings of Salman Rushdie.

Mounir Fatmi makes visible to the spectator the paradoxical aspect of our understanding of images. With this exhibition, he invites us to take part in sensory journey, going over the simple act of seeing, in a place where the dialog between the physical and metaphysical can take place.

The exhibition will start with the projection of the video Sleep Al Naim devoted to Salman Rushdie; formal reference to the experimental film realized in 1963 by Andy Warhol representing the poet John Giorno while he is sleeping. Not able to directly meet the British writer, mounir fatmi uses for this video the new technologies of image to create the presence of Rushdie in a contradictory status, suspended in a kind of physical abandonment between vulnerability and quiet force.

Who is Joseph Anton?, is a work also inspired by Rushdie which shows us the interest of mounir fatmi regarding composite drawings. For this work, ink jet printed on mirror, he uses as a pretext Rus- hdie’s pseudonym — Joseph Anton — composed with the names of writers Joseph Conrad and Anton Chechkov. By building a unique portrait from faces of the three writers, mounir fatmi creates for the spectator the visual experience of a new identity, the one of a fugitive.

La Divine Illusion, created with the same ink jet technique, superimposes study drawings from the Rorschach test over pages from religious books. With this series of works, mounir fatmi seeks to inter- rogate the spectator about the idea of absolute truth usually granted to religious text.

Also, the performative sculpture Le Paradoxe de l’unicité will stage an obsolete remolded machine, carrying a direct reference to the emblematic work of Kasimir Malevitch, L’aiguiseur de couteau from 1912 which represents the transition between figuration to abstraction. Here, pieces of Arabic calligra- phy will be whetted and then put on the floor. With this performance mounir fatmi wants to demonstrate the relation that exits between the official Arabic and Holy words, from the Quran. Finally free from its written form — which is anterior to its existence — the religious text finds its potential abstraction back, laying down on the floor the dogmatism of writings.

Jusqu’à preuve du contraire (03) proposes a new adaptation of an installation created by the artist in 2012. Composed with neon tubes on which the 24th Sura from the Koran — called “The Light” — is written, the installation presents itself as a hypnotic source which prints the sacred text on the eyes of the spectator. The eye is here transformed with a kinetic effect in an individual memory, which projects itself on the world.

Mounir Fatmi (b. 1970, Tangiers), lives and works between Paris and Tangier.

Mounir Fatmi’s work has been shown in numerous solo exhibition, in the Migros Museum für Gegenwarskunst, Zürich, Swit- zerland, at the PIcasso Museum, war and peace, Vallauris, at the FRAC Alsace, Sélestat, at the Contemporary Art Center Le Parvis, at the Fondazione Collegio San Caro, Modena.

His installations have been selected in biennials such as the 52nd and 54th Venice Biennial, the 8th biennial of Sharjah, the 5th and 7th Dakar Biennial, the 2nd Seville Biennial, the 5th Gwangju Biennial and the 10th Lyon Biennial.

Mounir Fatmi was awarded by several prize such as the Cairo Biennial Prize in 2010, the Uriöt prize, Amsterdam and the
Grand Prize Leopold Sedar Senghor of the 7th Dakar Biennial in 2006.