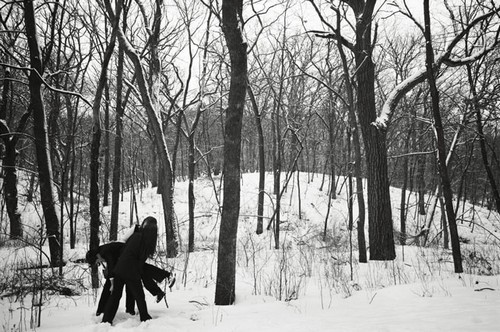 Yvon Lambert New York is pleased to announce Turns Gravity, Anna Gaskell’s second solo exhibition at the gallery. Turns Gravity will feature new photography by the artist and will run concurrently with an exhibition of new work by Swiss artist Christian Vetter. The exhibitions will open with a reception for the artists on Friday, May 21 from 6-8pm and will be on view until June 26, 2010.
Gaskell’s photographs are imbued with a sense of mystery, with the artist creating an aesthetic sequence that embodies ideas such as doubt, faith, fear, loss and sacrifice. The visual narrative is punctuated by fleeting glimpses of an event, brief moments in time of which the surrounding circumstances are not entirely revealed. Gaskell photographs her subjects as a close observer, but the resulting views are obstructed and the features cropped. The images are actively ambiguous on the part of the artist. Visions of psychological manipulation, indoctrinations, and other religious rituals permeate each scene. There is a discernable tension created by isolating a particular dramatic frame, and the artist leaves the viewer to interpret the situation being captured, as well as connect the narrative as a whole.
Anna Gaskell (born Des Moines, Iowa, 1969, lives and works in New York City) studied at the Art Institute of Chicago, where she received a B.F.A. in 1992. In 1995 she received a M.F.A. from Yale University. Gaskell has had solo exhibitions at venues including: The Box at the Wexner Center for the Arts, Columbus, OH; The Menil Collection, Houston, TX; Des Moines Art Center, Des Moines, IA; Castello di Rivoli, Turino, Italy; Kölnischer Kunstverein, Köln, Germany; and Aspen Art Museum, CO. Gaskell is in the permanent collection of many institutions, a selection of which includes: Whitney Museum of American Art, NY; Walker Art Center, Minneapolis, MN; Tate Gallery, London, UK; Solomon R. Guggenheim Museum, NY; San Francisco Museum of Modern Art, CA; Museum of Contemporary Art, Los Angeles, CA; Museum of Contemporary Art, North Miami, FL; The Judith Rothschild Foundation at The Museum of Modern Art, NY; Deste Foundation, Athens, Greece; Astrup Fearnley Museum of Modern Art, Oslo, Norway; The Israel Museum, Jerusalem; Museum Ludwig, Köln, Germany. In 2009 Gaskell received the award for Best Documentary Short Film at the Los Angeles Film Festival. She was an artist in residence at the Des Moines Art Center in 2005, and the same year she received an award from the KunstFilmBiennale in Cologne. In 2002 she won a Nancy Graves Foundation Grant, and also received the Citibank Private Bank Photography Prize in 2000.
www.yvon-lambert.com