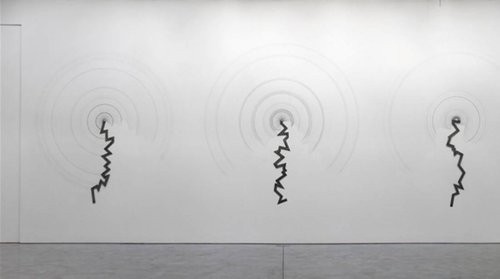 Yvon Lambert is pleased to announce the third exhibition by Mexican artist Carlos Amorales at the New York gallery. Entitled Aftermath, the exhibition will feature a new installation and wall drawings by the celebrated artist. The exhibition will open with a reception for the artist on Saturday, October 23 from 6-8pm and will be on view until November 20, 2010.
Rooted in issues of life and death, mythology, and unconscious dream states, Amorales’ body of work is personally anecdotal, yet open to the viewer’s interpretations of the narrative. The artist’s fantastical aesthetic is often contradictory in nature: revealing yet enigmatic, disquieting yet encouraging. The inspiration for Aftermath is the devastating 1985 Mexico City earthquake that destroyed a large part of the city, killing thousands. When the earthquake occurred, it rendered the government incapacitated for a week. During this governmental lapse, Mexican civilians took over rescue efforts and general aid tasks. For Amorales, the shattered city reflected the severely corrupt Mexican government. The experience of living a week of anarchy, mitigated by the strong resolve of the citizens, combined with Amorales’ strong reaction to the destroyed buildings, has greatly shaped the artist’s personal and aesthetic development.
Aftermath serves as homage to this monumental moment in Amorales’ formation as an artist. The exhibition also functions as a political commentary, questioning both the need for the state’s rule in our society, and how large-scale catastrophes shape history. The wall drawings, made by rotating jagged rulers around a central point, suggest large seismic cracks and aftershocks. Six fictional newspapers, three in English featuring excerpts from Emile Zola’s Germinal, and three in Spanish with selections from El Peor Dia, combine images of the earthquake’s destruction with the classic anarchist texts. The newspapers, partially printed and partially hand drawn by the artist, will be displayed on a table as a singular installation.
Carlos Amorales (b. Mexico City, 1970) lives and works in Mexico City. His work is featured in prominent public and private collections throughout the world, including: The Museum of Modern Art, New York; Tate Modern, London; The Margulies Collection, Miami, Florida; The Philadelphia Museum of Art, Pennsylvania; and the Israel Museum, Jerusalem. Amorales has exhibited internationally at institutions such as the Centre Pompidou, Paris; The Power Plant, Toronto; Contemporary Arts Center, Cincinnati, Ohio; The Orange County Museum of Art, California; Museo Amparo, Puebla, Mexico; Cabaret Voltaire, Zurich; The Iris
www.yvon-lambert.com