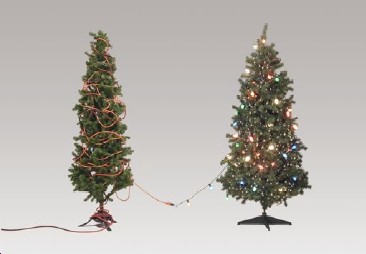 Yvon Lambert New York is pleased to announce Christmas in July, a group show curated by Simon Castets. The exhibition will feature work by John Baldessari, Lynda Benglis, Michael Brown, Heman Chong, Alex Da Corte, Elmgreen & Dragset, Douglas Gordon, Christian Holstad, Jonathan Horowitz, Matt Keegan, Keegan McHargue, Marepe, Kris Martin, Aleksandra Mir, Sarah Ortmeyer, Ariel Schlesinger, Roman Signer, Katja Strunz and Nick Van Woert. During the show, Jonathan Horowitz will designate part of the gallery as a “Free Store,” where visitors are invited to bring in belongings that they wish to leave behind or take away anything that they like. The exhibition will open with a reception on Thursday, July 1 from 6-8pm and will be on view until July 30, 2010.
Anthropologist Claude Lévi-Strauss writes, “During both Christmas and the Saturnalia, society functions according to a double rhythm of heightened solidarity and exaggerated antagonism and these two aspects act together in balanced opposition.”1 The Saturnalia was an ancient Roman festival celebrated in December during which societal roles were reversed, celebrations were rich, and laws were void. Commonly theorized to be the historical basis of several traditions associated with Christmas, the Saturnalia included revelry, gift exchange, and gatherings of friends. The works in this exhibition reflect the dualities underlying the spirit of Christmas and highlight the resulting tensions between religious and secular, celebration and angst, as well as makeshift gift economy and permanent market economy.
The phrase “Christmas in July” became widely known due to Preston Sturges! Hollywood comedy Christmas in July (1940), in which the protagonist engages in careless spending after his colleagues trick him into believing he won $25,000. “Christmas in July” quickly became a popular celebration, and is now an unofficial holiday that refers to various festivities, notably in the southern hemisphere where July is the coldest month. Most commonly, the term is used as a marketing ploy by retail stores to make up for the lack of sales opportunities in the summer. Advertisements promoting “Christmas in July” sales have been popular since the mid-twentieth century, and continue to flourish today.
Celebrating Christmas during the opposite time of year further emphasizes the polarities inherent to the Saturnalia and Christmas traditions, and underscores the contradictory nature of a contemporary ritual in the making.
www.yvon-lambert.com