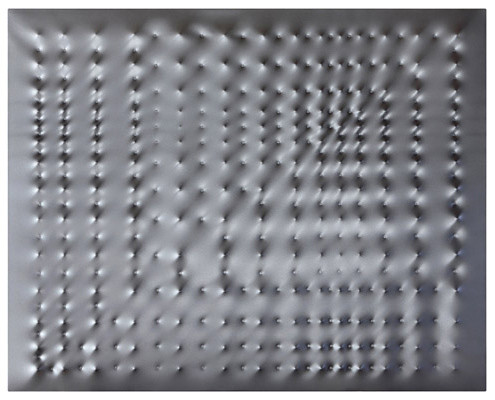 “Space is a doubt: I have constantly to mark it, to designate it.
It’s never mine, never given to me, I have to conquer it.”
--Georges Perec, Espèces d’espaces

Yvon Lambert New York is pleased to present Espèces d’espaces (Species of Spaces), a group exhibition featuring works by Robert Barry, Louise Bourgeois, Michael Brown, Stefan Brüggemann, André Cadere, Carter, Enrico Castellani, Liam Gillick, Jenny Holzer, Roni Horn, Bethan Huws, On Kawara, Zilvinas Kempinas, Anselm Kiefer, Louise Lawler, Zoe Leonard, Jill Magid, Brice Marden, Jonathan Monk, Roman Opalka, Christian Vetter, Ian Wallace and Lawrence Weiner. The exhibition will open with a reception for the artists on March 28, 2009 from 6-8pm and will be on view until May 16, 2009.
Espèces d’espaces is inspired by the 1974 book by Georges Perec with the same title. French author Perec (1936-1982) is perhaps best known in Europe for his linguistically creative writings. He addresses the constraints of language and space and how altering placement and size can change perception. Georges Perec’s Espèces d’espaces focuses on the relationship between space and the objects that fill it. Space is what we live in, what we experience, and what we fill with our possessions and ourselves. From the space of a sheet of paper to the space of a city, Perec encourages a consciousness of what occupies both virtual (imagined) and physical space. In his writings, he explores how spatial confines can change the reader’s experience. To illustrate this, Perec alters perceptions of words on the page by writing in margins, adding extra spaces, and changing the continuity of a typical written page.
The artists featured in this exhibition employ space in diverse ways that parallel Perec’s delineation of space, beginning with compact areas and extending to the infinitely large space of the cosmos. Perec ponders what happens when the position of an object in a room or space is changed. Like Perec, artists work under spatial limitations and they must be aware of how space affects their work. The materials of the works featured are visible, several even threedimensional, whereas Perec constructs spatial relationships with words.
Espèces d’espaces features a wide variety of works in myriad mediums. Among the works featured will be a book edition by Anselm Kiefer; paintings by Roman Opalka and Enrico Castellani; a new LED by Jenny Holzer; a sound piece by Lawrence Weiner; neon sculpture and word vitrines by Bethan Huws; new sculpture by Jonathan Monk; and a new photograph by Louise Lawler.
www.yvon-lambert.com