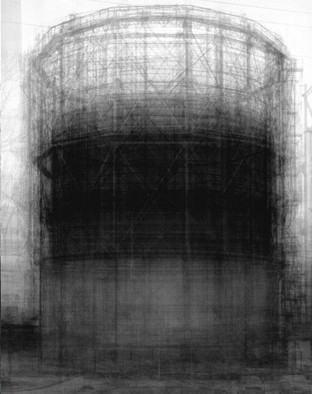 New York, NY, October 4th, 2007 — Yvon Lambert is pleased to announce Idris Khan’s first solo exhibition in New York. Marking an important development in the British-born artist’s work, the exhibition features a new multiple-screen film installation and photographs. The show will be accompanied by Khan’s first extensive catalogue published specifically for the occasion of this exhibition, which includes an essay by Trevor Smith, curator-in-residence at the Center for Curatorial Studies at Bard College. The exhibition will be on view from October 4th through 29th, 2007, and is open Tuesdays through Saturdays from 10AM-6PM. A reception for the artist will be held at the gallery on October 4th from 6-8 pm. Idris Khan’s work is an enigmatic play of appropriation and re-creation. Combining analog and digital photographic techniques, his works possess characteristics more akin to drawing or painting, animated by the accumulative intervention of the artist’s hand. Known for his works based on historical figures such as the Bechers, Caravaggio, Bach and Freud, Khan treats the works of such figures as literal building blocks to create a single composite image. Khan will present new photographs based on music scores, books and landscapes, and will also debut his second film based on Franz Schubert’s last three piano sonatas. Mesmerized by the music Schubert wrote on his deathbed, Khan edits together layers of subtly different performances of the composer’s final sonatas, as performed by British-based pianist Warren Mailey-Smith. Focusing at different moments on the keyboards, strings and hammers of a piano, he builds up a rhythmic structure of repetition and difference that holds the viewer in suspense; following the dynamics of the composition as well as the subtle play between the different readings of it. Intended as a homage to Schubert’s final mortal labors, it seems Khan also intends his work to be a reverie on mortality and the capacity of art’s eternal recurrences to transport us beyond mundane, sometimes painful, reality. Khan’s most recent book piece, Friedrich Nietzsche ... Thus Spake Zarathustra (2007), will be featured with a reprint of Khan’s earlier work, Every... page of the Holy Quran (2004). Nietzsche’s dense, esoteric treaty on morality and the absence of God is captured by the overwhelming shadow of the book’s gutter. It is no coincidence that this new work is shown together with the Quran, based on the artist’s father’s own Quran to serve as a reflection of his father’s faith. Also included will be photographs based on the piano preludes by Sergei Rachmaninoff which span the entire life of the great virtuoso, and Richard Wagner’s last Opera “Parsifal” which examined good and evil, light and dark, physical passion and spiritual abstinence. Idris Khan was born in Birmingham, England in 1978 and now lives and works in London. He received his MA in Fine Art at the Royal College of Art in 2004 and has since exhibited internationally in a number of major group exhibitions including Contemporary Photography and the Archive at SFMOMA and the traveling group show Regeneration: 50 Photographers of Tomorrow, organized by the Musée de l’Elysee in Switzerland. Recent solo exhibitions of Khan’s works have been held at Victoria Miro Gallery, London (2006), Fraenkel Gallery, San Francisco (2006) and Thomas Schulte Gallery, Berlin (2007). His films will be presented at “Late at Tate Britain” and Kunst Film Biennale in Koln, Germany later this year. In addition, Khan has two major public art commissions in London and Dublin in 2008.
www.yvon-lambert.com