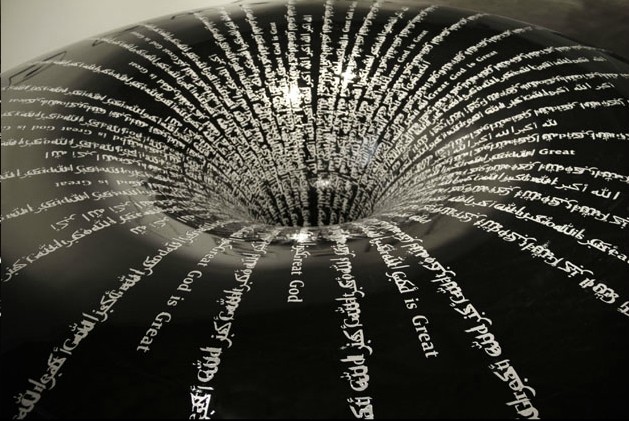 Yvon Lambert is pleased to announce The Devil’s Wall, Idris Khan’s second solo show with the gallery. This exhibition will feature new photographic works, drawings, and sculptures by the artist. The Devil’s Wall will open with a reception for the artist on Wednesday, April 13 from 6-8pm and will be on view until May 14, 2011.
Idris Khan employs literary text, digital photographs, and musical scores to create works that call into question modes of appropriation, religion, authorship and abstraction. Khan’s artistic practice follows patterns and rules that blur the rigid cultural boundaries between the secular and spiritual. History and culture are the building blocks for his art, as he layers original images over each other to make a single work that reveals the texture and delicacy of the subject. For The Devil’s Wall, Khan will exhibit new sculptures based on his interest in the ritual and solitude of the stoning of the Jamarat, an aspect of the Hajj pilgrimage to Mecca made by millions of Muslims each year. During this act, pilgrims chant and throw seven stones at three walls in three different locations, with each wall representing the devil. Although this experience is a communal one, the pilgrims are encouraged to turn their attention inward, through contemplation and meditation, to rid their spirit of impure thoughts, which ultimately brings them closer to the divine. For these sculptures, Khan removes the three walls, leaving only the circular dish in which the stones gather after hitting the wall. The gesture of throwing is paramount in this work as the artist focuses on the transference of thoughts into objects and text. Khan represents this evolution by embedding traces of words into the object’s surface and having the words subtly disappear into the central vortex of the sculpture.
Khan exhibits new drawings entitled 21 Stones, an entirely new medium for the artist. He rhythmically stamps his own thoughts and wishes onto paper, offering a secular approach to the spiritual practices of meditation evoked by the installation. Also on view during The Devil’s Wall will be three photographic works based on New York minimalist music of the late 1960s. In these photographs, Khan also utilizes the square shapes celebrated by minimalist artists such as Agnes Martin and Robert Ryman. Listening to the music of minimalist composers, including Philip Glass and Steve Reich demands a prolonged level of concentration as the repeated musical patterns carries the listener away from their immediate thoughts. Khan likens these rhythmical patterns to the actions of millions of pilgrims throwing stones or chanting the same words to create an endless sound. In Contrary Motion, the artist uses a type of music that has no true conclusion, which Glass refers to as “open-form.” The composite image created by Khan exposes the process of accumulation and creates a seemingly endless pattern; only a blurred line highlights the slight changes in the repetition.
The artist’s delicate process of overlapping surfaces to reach a metaphysical space of emptiness is evoked throughout this exhibition, as Khan presents nothingness as an object, allowing for the space of the spiritual to envelop the viewer.
Idris Khan (b. 1978, Birmingham, England) lives and works in London. He has had solo exhibitions at international venues including: Elementa, Dubai; Museum of Contemporary Canadian Art, Toronto; Victoria Miro, London; K 20, Dusseldorf; and Fraenkel Gallery, San Francisco. He has also been featured in numerous group exhibitions at venues including: The Solomon R. Guggenheim Museum, New York; The Saatchi Gallery, London; Espace Culturel Louis Vuitton, Paris; Baibakov Art Projects, Moscow; Institute of Contemporary Arts London; San Francisco Museum of Modern Art; and the Helsinki Kunsthalle.
www.yvon-lambert.com