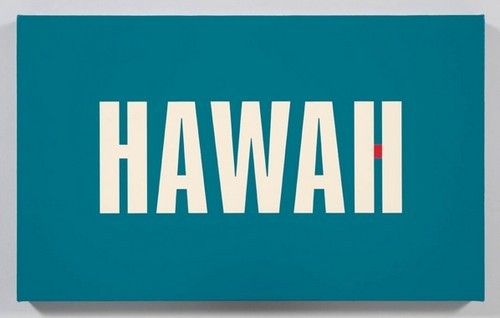 Yvon Lambert, New York is pleased to announce an exhibition of new work by American artist, Kay Rosen. The exhibition titled “Scareful!” features new works that include paintings on canvas, large wall paintings, drawings and sculpture. The exhibition will open with a reception for the artist on November 20th from 6 to 8pm, and will be on view from November 20th 2008 through January 3rd 2009.
Kay Rosen has been making work for almost four decades after a formal education in liguistics. She approaches language in a physical way; focusing on the structure of short phrases, words, and letter forms to affect reading and expand meaning. For Rosen, language is not limited to formal rules, but what is stumbled upon accidentally, in found parts of speech that have the potential to convey meaning non-linguistically. Predictable, cognitive, and linear reading is disrupted and reprocessed as a visual experience.
Rosen’s work is often interpreted as a reaction to certain political events, but the artist purposely resists the urge to attach exclusive meaning to the work; she feels language is fluid and changes with time, context and audience. In the fall of 2008 in the United States however, it is difficult to exclude politics from the large one-word wall painting “Removal From Office” (REMOVAL), with its italicized word part. “Justified,” a two-walled painting facing the street, is characteristically more open-ended, but flexible enough to be plugged into recent political discourse.
Likewise, her message writ large in the 1983 multi-paneled installation at Alexander Gray and Associates, “No Noose Is Good Noose,” in tandem with “Scareful!” is as timely today as it was in the 1980’s.
Kay Rosen’s work is included in the permanent collections of The Museum of Modern Art, New York; the Whitney Museum of American Art, New York; the Art Institute of Chicago; Museum of Contemporary Art, Los Angeles; the Indianapolis Museum of Art; and Rebaudango Collection in Turin, Italy.
www.yvon-lambert.com