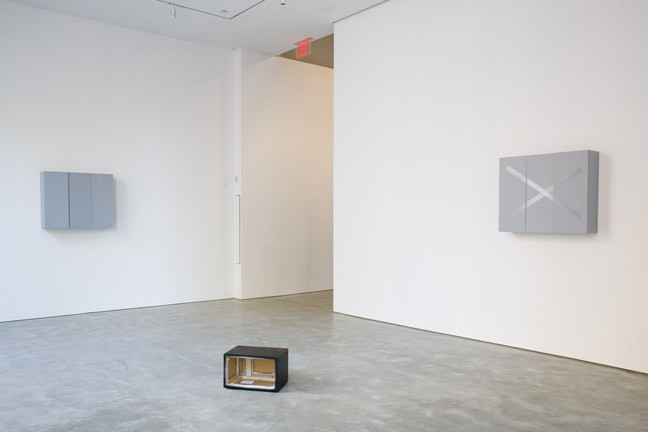 New York, NY, May 8, 2007 — Yvon Lambert New York is pleased to announce its first exhibition of work by Los Angeles based artist, Kaz Oshiro. A selection of new pieces will be installed in the front gallery at 550 West 21st Street. The exhibition will be on view from May 31 through June 30, 2007, and is open Tuesday through Saturday from 10 am to 6 pm. A reception for the artist will be held at the gallery on Thursday, May 31 from 6 to 8 pm.

Upon first encountering Kaz Oshiro’s work, the viewer is confronted with a visual conundrum: have the objects on the wall (cheap household cabinetry) and the floor (professional sound amplifiers) simply been plucked from their original settings and re-contextualized by their art gallery presentation or are they newly created, artificial surrogates? Close inspection reveals that they are, indeed, meticulously painted canvases constructed to the exact scale of the original. Made of wood stretchers, canvas, acrylic paint and sometimes bondo (a car body repair material), the artist “customizes” these banal, mass produced objects with signs of faux wear and tear - scuffs and stains - as well as graphic appliqués like rock band stickers.

Orshiro’s mimetic containers imitate their source in form and surface appearance, but offer perceptual contradictions. His cabinets are non-functional and empty of contents except for the stickers that hint at some potential owner’s attempt at personalization. His amplifiers sit silent, waiting perhaps for a nonexistent charge of voltage to bring them to life, their stenciled band logos graphically embodying the sounds and energy of their namesakes.

Imbued with the traditions of tromp l’oeil painting, Duchamp’s ready-mades, and minimalism’s use of serial components, Oshiro’s work reflects his own meticulous observations while suggesting a sense of solitude, reflection and meditation. The viewer is left to contemplate the artist’s indirect control of space and admire the beauty of the peripheral.

Kaz Oshiro was born in Okinawa, Japan and emigrated to the United States in 1986. He completed his Master of Fine Arts at California State University, Los Angeles in 2002 and has had numerous one person and group exhibitions in the United States and abroad including, One Way or Another: Asian American Art Now, at the Asia Society and Museum in New York, Deaf: From the Audible to the Visible, at Galerie Frank Elbaz, Paris, and Thing: New Sculpture from Los Angeles, at the UCLA Hammer Museum, Los Angeles. A survey of his work, Kaz Oshiro: Paintings and Works on Paper ’99 – ’06 is currently on view at the Las Vegas Art Museum.
www.yvon-lambert.com