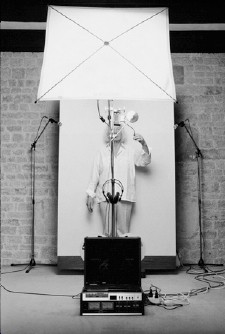 "I wanted to express time - the changes in its duration that divulge nature- in a way very personal to man, a subject conscious of his own presence defined by death. The emotion of life in an irreversible time."
-Roman Opalka


Yvon Lambert New York is pleased to announce Passages, Roman Opalka’s first solo exhibition with the gallery.
Passages features four large-scale paintings from Opalka’s seminal series “OPALKA 1965/1 - ∞ ” , including the artist’s most recent work. The exhibition will open with a reception for the artist on September 9 from 6 to 8pm, and will be on view until October 16, 2010. The exhibition in New York will run concurrently with an exhibition of the
same title at Yvon Lambert Paris from September 4 through October 9, 2010.
Conceived by Opalka in 1965, the “OPALKA 1965/1 - ∞ ” project dictates the future of his painting, as the artist is recording the succession of numbers from one to infinity. The numbers progress from one canvas to the next, with the artist beginning each new painting where he finished the last. Each canvas, referred to by Opalka as a “Detail”, is of equal size. This project, on which the artist has worked exclusively for forty-five years, features 233 paintings to date.
This lifelong endeavor began when Opalka painted a small white numeral “one” on the upper left corner of a black canvas. For the artist, the #0 brush dipped in white paint helps visually log numbers, numbers that he also says out loud in Polish, his mother tongue, and records on tape. After each work session, Opalka photographs himself in a white shirt with strong lighting in front of his painting. In 1972, Opalka began gradually introducing white into the black background of each canvas. This progression will inevitably lead to the white monochrome, a fusion of form and content depicted in the daily ritual of the artist.
According to Opalka, the consciousness of one's own passing can only be transcended in the physical rendering of painting. The artist does not transcribe dates like On Kawara, rather Opalka attempts to translate time through a series of numbers that preserve their graphic and symbolic qualities. If the start of this project is determined both in time and in its numerical unit, the end is still open and will take place at the death of its creator.
Roman Opalka was born in 1931 in Hocquincourt, France of Polish origins. He has lived and worked in France since 1977. Opalka won the celebrated Grand Prize of the 7th International Biennial of Arts and Graphics of Cracow in 1969; the C. K. Norwid Art Critics Award in 1970; France’s National Painting Prize in 1991; and Germany’s Kaiser Prize in 1993. Opalka’s work is included in principal museum collections including: The Solomon R. Guggenheim Museum, New York; The Museum of Modern Art, New York; Los Angeles County Museum, CA; The National Gallery of Berlin; Centre Pompidou, Paris; and the Toyota Museum, Japan. His work is also featured in important private collections including: the Menil Collection, Houston, TX; Sammlung Lenz Schönberg, Zöll, Germany; le Fonds National d’art Contemporain, Paris; Ludwig-Stiftung für Kunst und Wissenschaft, Vienna. In 1992, the Musée d’Art Moderne de la Ville de Paris mounted an important solo exhibition of his work titled OPALKA 1965 / 1 - ∞. Invited eight times to participate in the Venice Biennale, Opalka represented Poland in 1995. In 2009, he received the title of « Commandeur des Arts et des Lettres » from France, and the Gold Medal for Merit in the Arts from Poland.
www.yvon-lambert.com