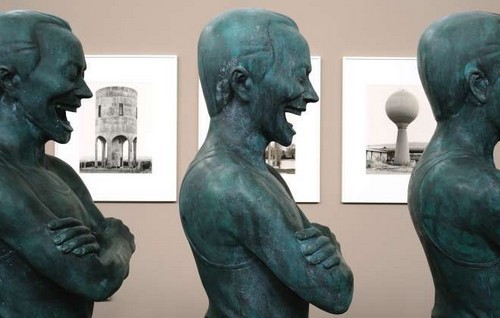 Pete and Repeat is an exhibition drawn entirely from the Zabludowicz Collection, featuring works by 35 artists from 15 countries who use strategies of repetition. Whether by irresistibly returning to a subject or theme, remaking a canonical work of art, serialising a formal element or demonstrating persistent patterns of behaviour, the works in Pete and Repeat all operate in the realm of repetition. Together, they generate a game of ‘Spot the Difference’, inviting the viewer to ponder what those differences reveal about the works themselves and our assumptions about originality, authenticity and creation.

By including works in a wide variety of media ranging from sound and video to sculpture and painting, made between 1977 and 2009, Pete and Repeat seeks to explore the ways in which artists use repetition and to what ends they deploy this strategy. It will emphasize the difference inherent in every instance of repetition, and will reveal the false promise of true repetition. It will highlight the originality that accompanies remaking, reiterating and repeating, showing that any reproduction is always first and foremost a mode of production and that nothing is ever truly the same twice.

Many works in Pete and Repeat display a strong visual identity that ties them back to geometrical constructions ranging from modernist grids to conceptual seriality; in a repeated mode, the economy and severity of these forms take on more humanist positions, infused with the indeterminacy and variety of life, culture, emotion and humour. The works overtly engage with the complexities of urban environments, popular culture, media or the history of art and often display a tongue-in-cheek attitude.

The exhibition will be accompanied by an ambitious series of talks and debates, and a publication for which artists in Pete and Repeat have been invited to write about specific works in the show, and which will also include a selection of new and reprinted texts about ideas relevant to the exhibition.

The title Pete and Repeat is taken from Bruce Nauman’s 1987 video work Clown Torture in which an increasingly frustrated clown repeats a circular joke to camera. This work is not included in the exhibition.
www.zabludowiczcollection.com