The Shape We’re In (London) 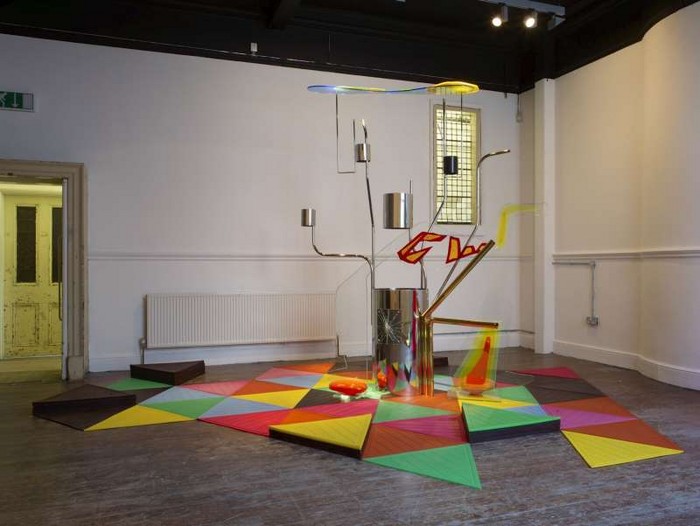 The Zabludowicz Collection is delighted to present The Shape We’re In, a series of three exhibitions focussing on recent sculpture and installation by 22 emerging and established contemporary artists, including some of the most original artists making work today. Ten artists have been commissioned by the Zabludowicz Collection to make new works for The Shape We’re In, taking into account the unusual structure and unique opportunities offered by this tripartite transatlantic exhibition.

The Shape We’re In brings together over 100 sculptural works made over the past five years, many of which express a strong spirit of socio-political critique. The exhibition takes on a manifold structure, occupying various sites across two major art world hub cities. It reclaims spaces which have been left vacant by the recent economic downturn, such as vacant shops in Camden, London and an empty floor in a New York skyscraper. The exhibition’s title also plays on a commonplace attitude of self-conscious analysis and improvement inherited from the self-help movement, picked up on by many of the works which reference the media and popular culture.

Taking place across three idiosyncratic locations: the former Methodist chapel at 176 Prince of Wales Road, London, home to the Zabludowicz Collection; a number of vacant shops in the London Borough of Camden; and the 33rd floor of a skyscraper on New York’s Times Square, The Shape We’re In encourages the public to engage with works in new and informal ways. The three shows also emphasise the Collection’s ongoing dedication to context-specificity. Each will engage with local contexts and communities, responding to each exhibition site through a tailored programme of public events.

Several artists are included in more than one iteration of the The Shape We’re In: Jack Strange’s painterly installation, Special Effects, a work which involves the direct application of the artist’s blood onto shopfront windows, will feature in a vacant shop in Camden and at 176 Prince of Wales Road while Ethan Breckenridge and Sean Dack will exhibit two versions of the same sculptural installation in London and New York.

The Shape We’re In (London) will feature new work by emerging artists including Rachael Champion, Samantha Donnelly, Peggy Franck, George Young and Jack Strange, alongside existing works from the Collection. These artists have been invited to realise new installations during a short residency of one month leading up to the exhibition. By facilitating this kind of open-ended process, the Zabludowicz Collection encourages emerging artists to develop their practice for public exhibition.

The Shape We’re In (Camden) presents Jacks Strange’s blood installation and neon sculptures by Dan Attoe and Tracey Emin in vacant shops around the local area. A Camden Council-led initiative currently encourages the occupation of unused properties in the borough, to act as a revitalising presence in economically depressed areas of the city. These works can be seen between 10am and 10pm daily, and to particularly striking effect in the evening.

The Shape We’re In (New York) features five artists who use sculptural practice to examine social interactions within man-made environments. Each artist has been invited to respond to a vacant space on the 33rd floor of 1500 Broadway, at the ‘picture postcard’ heart of New York City. Artists Sarah Braman and Nick van Woert will present new work alongside some of their existing work from the Zabludowicz Collection. Ethan Breckenridge and Sean Dack will exhibit a version of a work first seen at The Suburban in Illinois: a sculptural and audio installation which includes the visitor as an active participant, a version of which will also be installed in London. The Shape We're In (New York) includes work by Sarah Braman, Ethan Breckenridge, Sean Dack, Matthew Darbyshire and Nick van Woert.

The various context-specific manifestations of The Shape We’re In demonstrate the Zabludowicz Collection’s international vision and its commitment to supporting younger artists through new commissions as well as presenting them in relation to works by more established contemporary artists.

The Shape We’re In is curated by Elizabeth Neilson and Ellen Mara De Wachter
www.zabludowiczcollection.com