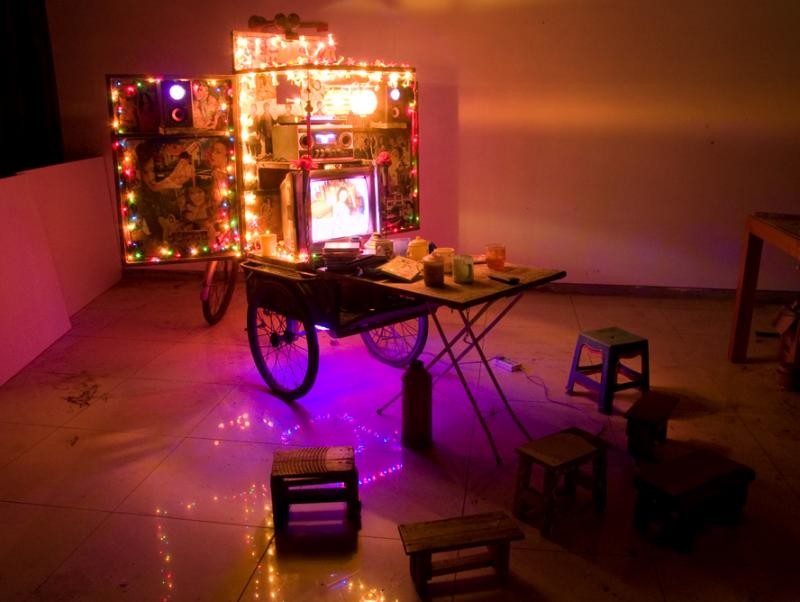 The exhibition takes as its theme the notion of space. It looks at how space is constructed in social ways, through our fantasies about them, through our occupation of them, as a result of how we move through them, and the violence we use to try to control them. It includes works by eleven artists from the Zabludowicz Collection plus a new site-specific commission by Helene Kazan.

Troubling Space: The Summer Sessions looks at space as a social field; each of these works points to how even spaces we assume are physical are also social in very significant ways. The works in the exhibition will be the subject of intense analysis over the course of the first three weekends in July, when the Summer Sessions will take place. These will consist of talks by artists, academic lectures and social events related to three specific areas: Spaces of Distribution and Production; The Body in Space; Spaces of Utopia and Dystopia. This programme is integral to the project: it responds to recent events in the public realm, taking them as an imperative to put all spaces to use; in particular, it seeks to convert the gallery space into a pedegogical space and a space of resistance.

Troubling Space: The Summer Sessions emphasises the expanded nature of contemporary curating, which includes exhibitions as well as time-based events and the production of discourse, and of meaning. It uses the idea of troubling space to trouble the space of the contemporary art collection itself, asking artists and members of the general public to spend more time than usual with particular works of art. The project brings the collection into direct dialogue with current social and aesthetic debates.. The talks and discussions which take place during the first three weekends of the show will be recorded, and listening posts will be installed in the galleries, so that visitors can engage with the debates after the fact.

Christoffersen and Llorens have mined the Zabludowicz Collection to put together an exhibition which includes works by artists from several generations, including established figures such as Francis Alys and Gregory Crewdson, and relative newcomers such as Trisha Baga and Ethan Breckenridge. The project will feature furniture to be used during the sessions, and designed by Emil Krøyer, who specialises in structures intended to serve the dual purpose of presenting art and facilitating social engagement.