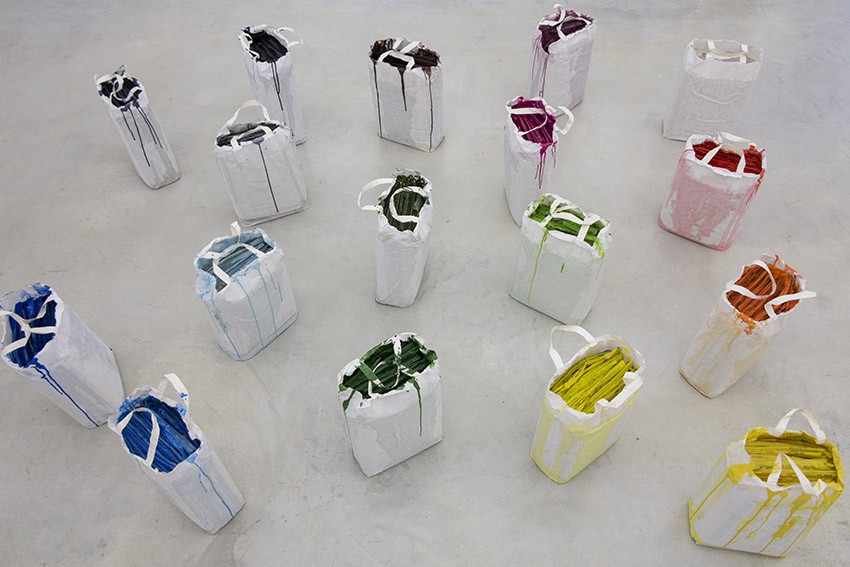 ŻAK | BRANICKA is delighted to present the exhibition Words and Colors with works by Jarosław Kozłowski – the artist’s first solo exhibition and likewise the beginning of his cooperation with the gallery.

Kozłowski is a legend in Polish conceptual art. Already long before the Cold War period had come to an end, his studio opened a window towards Western Europe: in the early 1970s, he established the artist network NET with over 350 international artists (thereby also arousing the interest of the secret service) and was a central protagonist of the Fluxus movement in Poland. In 1977, he organized a Fluxus festival at the gallery Akumulatory 2 (1972–89) that he founded, exhibiting the artists Richard Long, Reiner Ruthenbeck, Franz Erhard Walther, Victor Burgin, and Douglas Huebler, among others.

From the outset, Kozłowski has been dealing with concepts of space, time, logics, and language in his work. In the exhibition Words and Colors at the gallery ŻAK | BRANICKA, he is now presenting a selection of works from the past five decades. The dry, unemotional title of the exhibition reflects the analytical strategy characteristic for conceptual art, which shows a predilection for narrowing itself down to the naming of facts. The reduction of means indeed offers ample visual appeal, and the content of the exhibition is surprising: its focus is on color and the perception thereof, as was already a common theme in art history one hundred years ago. The prejudices associated with the notion of conceptual art are thus ironically refuted by Kozłowski.

The famous work Wall Painting was already exhibited at the gallery René Block in Berlin almost 40 years ago. It consists of several different-colored panels made of paper or ingrain wallpaper. The panels are color samples from walls that Kozłowski had personally painted – like a typical craftsman – in various apartments in Poznań, Berlin, and London, around 1979. At the time, these commissions had been paid by the respective customers according to tariff, per square meter. Hence, the actual originals are the colored walls (though it is doubtful whether these still exist today); the panels merely present color samples. With his work, Kozłowski was thus calling painting into question as a creative act of the artist.

In another work titled Exercises in Aesthetics from 1976, Kozłowski investigates the correlations between image and word: “59 varying color samples are evaluated aesthetically in the same way: ‘nor beautiful nor ugly.’ This phrasing was also chosen by Marcel Duchamp when he described that he had selected his readymades according to the criterion of aesthetic indifference. In Kozłowski’s case, the colors are not paintings, but readymades of equal value, self-referential and resistant to traditional aesthetic conceptions, through which they manifest their artistic autonomy. [...] With Duchamp’s readymades, the creative act of the artist had basically already been reduced to a verbal declaration act, merging together object of utility and artwork. The ‘Specific Objects’ of Minimal Art and Andy Warhol’s ‘Brillo Boxes’ likewise negate authorship, originality, and representation; rather, it is the idea that is foregrounded, which finally becomes the central formulation in conceptual art and renders the artwork as object superfluous. The logical structure of language is moreover turned into a representational model of reality, and thus the foundation of perception and realization.” (Björn Egging)

One does not have to be familiar with either Duchamp or Warhol, however, in order to clearly recognize the effect, which extends far beyond the context of art. Just like when in 1982, Kozłowski painted a wall in green at the gallery Akumulatory 2, and wrote upon it with red color: “The green wall without any certain (for example political) context.” For the secret service, this was enough to have the exhibition closed the next day. The same work – only in grey color – that was shown at the The New Museum of Contemporary Art in New York (1990) shortly after The Wende in turn caused a stir and induced several political commentaries on the grey reality behind the Iron Curtain. The issue concerning how freed of context (including political context) art can be is investigated by Kozłowski in his work News Games, for which he overpainted international newspapers with different colors, and folded and tucked them into white paper bags. “Here, Kozłowski is undertaking a form of anti-painting on a meta level that allows him to attain a high degree of artistic autonomy [...]. Up to this day, for Kozłowski, this liberty is the prerequisite to keeping a critical distance from the political conditions.” Kozłowski unveils the thought patterns through which we and our society function. It is now in the hands of the beholder to decide what this realization means to him or her. Just like in real life.

Born in 1945 in Srem. In the years 1963-1969, he studied painting at the State Graduate School of Visual Arts in Poznań, where he has also taught since 1967. In the years 1981-1987, he served as the academy`s rector. In 1991-1993, he was programming curator of the gallery and collection of the Centre for Contemporary Art Ujazdowski Castle in Warsaw. Fellowships with The British Council in London (1979) and DAAD Berlin (1984-85). His work has been shown in several museums and institutions such as Galerie Foksal, Warsaw (1972), Muzeum Sztuki, Lodz (1994), Künstlerhaus Bethanien, Berlin (1986), Brno House of Arts, Brno (2000),) 8. Sydney Biennale (1990) and 27. Biennale São Paulo (2006) among others. His work is a part of several international collections such as the MoMA in New York, El Museo de Arte Moderno de São Paulo, Generali Foundation, to name a few. He lives and works in Poznań.
www.zak-branicka.com