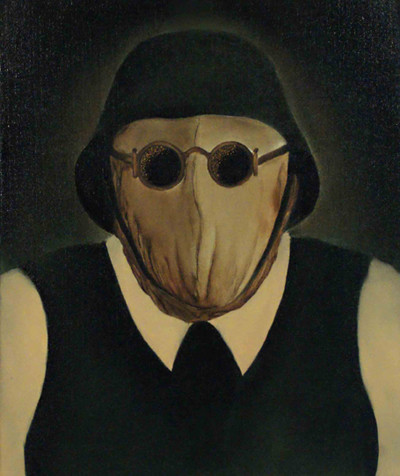 Michal Jankowski, "Maid", 2011, oil on canvas, 60x50 cm
Michał Jankowksi is part of the younger generation of artists, often labelled as “tired of reality,” the source of whose art is to be found not in the surrounding reality, but in the imagination, dreams, or hallucinations.

Jankowski is following the path of surrealism in full consciousness of the decades and movements that have passed. His latest series, "Astronauts" (2011), is inspired by the work of two classics of experimental filmmaking from the turn of the 1950s/60s – Walerian Borowczyk and Jan Lenica – who are regarded as pioneers and precursors of the world surrealism scene in the cinema of the absurd. This avant-garde arts duo was inspired, in turn, by the French avant-garde of the 1920s, chiefly by the surrealists and the dadaists. “The films of Borowczyk and Lenica are my point of departure, my starting point ... I try to submit to that remarkable atmosphere of horror, grotesque, and absurdity I found in them, and which is very close to my own sensibility”, says Jankowski. For him, the animation of the 1950s is not only a visual goldmine of motifs and "retro" aesthetics (his pictures draw such motifs from Lenica and Borowczyk as a man in a bowler hat, and a woman with a flower-face), but above all it is an ironic commentary on the "conditio humana". Under the thin layer of black humor and horror are existential themes culled from Franz Kafka or Eugène Ionesco. This is not Jankowski’s first allusion to the cinema in his work: his earlier series of works drew from Werner Herzog’s "Stroszek" and "Kaspar Hauser". They all can be read as metaphors of human fate.

Jankowski is building a family tree for his painterly philosophy, and in reaching back to the 1950s/60s and – indirectly – to the 1920s, he is exploring what is left of past revolutions in art. “The films of Lenica and Borowczyk, such as “Astronauts,” “The House,” or “School,” broke the mold, they were original, innovative, pioneering – they discovered new worlds. The two filmmakers can be considered as heroes, explorers, and fearless conquerors,” Jankowski states. This accounts for the exhibition’s title – ASTRONAUTS – presented at ŻAK | BRANICKA gallery.

The subject of his work is often the isolation, rebellion and negation that accompanies every birth of the new. Can today’s artist be so cheerfully innovative, so painlessly adventurous? It seems unlikely, because the consciousness or knowledge of the viewer is as much a burden as the consciousness of the artist. When every glance at a painting by Jankowski casts a shadow of Philip Guston, Hieronymus Bosch or Francis Bacon, nothing remains but a conscious game of hopscotch with art history.

This sad recognition that everything has already been done thus leads to instinctive self-destruction, and to the destruction of the components of the picture. The beautiful figures and objects in Jankowski’s work, painted almost Dutch-style, disintegrate into individual atoms, or something recalling a magic, cosmic dust – just to be reborn like a Phoenix from the ashes.