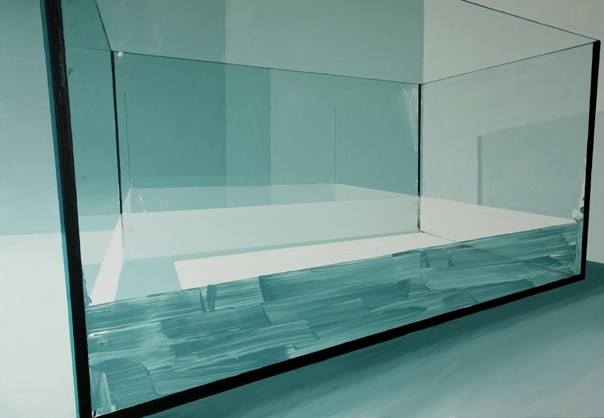 The exhibition is part of Gallery Weekend Berlin.

Upended little bags of Cocaine in which the drugs are replaced by a streak of white; an empty Aquarium, in the panes of which its own reflection is visible; paintings that copy faded, scaled down versions of themselves – these are the phantoms of Zbigniew Rogalski’s Paintings.

The natural environment of a painter is full of dangerous fallacies and optical plunges, full of recurrences, dependence and rituals. In a painting that depicts a large, empty aquarium, the artist painted some of its panes white. In this way, the glass, like a display window donning an “under construction” sign, refers to the domain of its given habitat. This domain is fundamentally quite small and self-contained, but through it one can peer into other words (those external) and become seduced by further reflections, none of which can be truly permeated. One thus becomes quickly aware that Rogalski’s paintings are descents wherein what we see is only a substitute for that with which we are we are presented. They are a pledge and a Baudrillard-esque Simulacrum: the Aquarium’s painted panes consist only of color. The cocaine in the little plastic bags is also only color (in the series, “Ghosts”). This is a type of painting that masks even itself.

Optical effects drive the metaphor in Rogalski’s painting. The amount of mirror images, endless reflections and visual distortions, are inconsistent with the rules of physics, suggesting that somewhere behind our range of cognition, exist other worlds – or also that the worlds that we see are not necessarily reality.

Rogalski began by unmasking painting. He painted fogged up panes of glass and mirrors onto which the names of pop-icons were written. He also painted works in which the canvases themselves were over-painted (already sounding quite close to a tautology). Later, he concentrated on reflections: discovering in windows, mirrors, panes of glass, and even in tombstone portraits on porcelain that which is concealed within their surfaces. The images of reflections develop and more realities appear within and are mounted on top of one another – for example the interior of his studio and the view out of its window are at once visible. Finally, Rogalski is interested in optical fallacies – the lies that our eyes tell us. The series Closer depicts the doubled perception that we have of faces when we approach too near to them.

Rogalski’s self-referential canvases are as though glass panes behind which the artist himself stands. His newest works renounce any narrative – only the reflections in the glass remain. The Aquarium series not only portrays that which isn’t there but also plays with traditions of abstract and modern art. In the images, that a black square reveal, we initially only see an echo of the Russian Avant-garde. After a moment, we recognize the delineation of an empty shoebox. The entirety of this geometry – the reflection within a reflection, the square within a square, the figure within a figure – is an artistic echo or hiccup of the image that the act of painting, through the recognition of the process of seeing, achieves. The goal of Rogalski’s painting is essentially a deceleration of cognition. He holds the observer in the moment in which the eyes already recognize the form but have not yet found the memory of its meaning. And exactly in this instant – just as in the novel One Hundred Years of Solitude – the story inverts itself: the end turns out to be the beginning and neither the viewer nor the artist can say what came first – the image or the paint.
www.zak-branicka.com