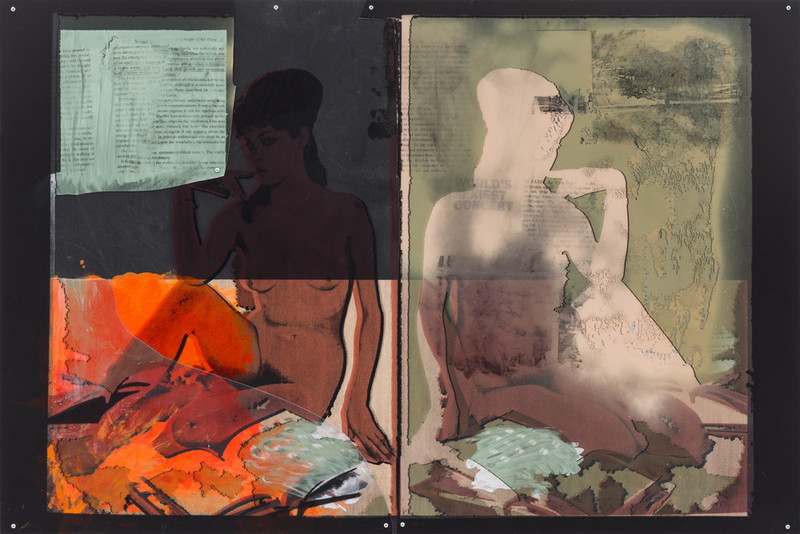 Zeno X Gallery is proud to present a new solo exhibition of Anne-Mie Van Kerckhoven (born 1951, Antwerp), ‘the Queen of the Underground’, as Rudy Vandendaele once described her aptly. In her tenth solo exhibition at Zeno X, Van Kerckhoven integrates new installation art, video, collages and text in her own idiosyncratic way. We are carried off to a universe in which a synergy arises between the female body, mysticism and technology, and in particular with the digital. In her collages, the artist combines images and words according to rhythms that manifest themselves in music, life and the soul. The images have been borrowed from the American magazine Playgirl (edition 1958) and have been rhythmically processed. Van Kerckhoven manipulates and transforms the images: she mirrors them and cuts them up; she changes the colours and makes digital annotations. Then she constructs horizontal and vertical collages, using paint as a linking element. The phrases she uses have been borrowed from texts by the mystic Marguerite Porete (1250-1310), the composer Karol Szymanowski (1982-1937) and the philosopher Henri Lefebvre (1901-1991). The words accompany the images and constitute a trialogue that is controlled by a fourth presence, namely the artist. Each Perspex collage bears the title of a chapter from Le Miroir des âmes simples et anéanties, the peculiar book written by Marguerite Porete, with whom Anne-Mie Van Kerckhoven identifies herself. The new video Een fontein van Aréthuse is a reinterpretation of a film by Dimitri Kirsanoff on music by Szymanowski.

The two exhibition spaces are governed by the rhythm of three Carrels, mobile studies that represent an Enigma, Colossus and Connection Machine. To a large extent these constructions defined the wars of the twentieth and twentyfirst centuries. They were used to encode and decode messages, with the aim to secure communication. But their mechanism was deciphered by the enemy and turned into a weapon against themselves. The carrels are machines that provide rest and make it possible to concentrate—machines in which one can think freely. They are reminiscent of the beautiful Kunstkammer of olden times, spaces in which one withdrew to contemplate and admire the world. At the same time, the carrels are a vehicle to turn raw digital information into human knowledge. Each carrel represents a development in the digital revolution, but also a stage of life. Enigma, a German encryption device that was designed in the 1920s, turns pomegranate red—a reference to femininity, fertility and sexuality. The heliotrope purple core is the ultimate colour of the spectrum the human eye can distinguish from infrared; it symbolises power and faith. On the back there is a collage including an Arab star that encourages the viewer to lose oneself in meditation and becoming one. The Arab star is mainly a patriarchal symbol, to which Van Kerckhoven adds a circle version to give a more universal dimension. In other images as well, the male is the central theme. The upper image features a vagina dentata, a woman with her legs spread, showing the all-devouring vagina. Underneath, a boy’s room is presented as a prehistoric cave—the place where a boy underwent the rites to become a man.

A decryption device that was used by Great-Brittain during the Second World War inspired the second carrel, Colossus. It was one of the first machines that could be programmed. The structure of this carrel is painted in gris de Versaille and fragments a reproduction of the bourgeois interior of a Parisian collector. The purple and black colours emphasize the decadence and doubt of the system that is highlighted here. In Van Kerckhoven’s view, capitalism has attacked itself and has collapsed. A moment of awakening has come. Connection Machine is not a clear statement; it is not yet defined and represents the present. The dark orange sheet of Perspex is transparent. There is a prudent optimism with regard to the future. Thus we arrive at the first parallel data processing unit from the 1980s build in the United States of America.

For Van Kerckhoven, the development of humans and technology are inextricably linked—a link that is certainly not disastrous. Technology is essential to cope with the complexity of a constantly changing society. Though it also involves dangers, it is a problem-solving mechanism we cannot do without. Already at a young age, she felt affinity with artificial materials such as plastic and synthetic fabrics, and she developed a fascination with artificial intelligence. Anne-Mie Van Kerckhoven’s glance is fragmented and cannot be captured in time or space. She does not like to subject herself to systems or structures and she analyses luxury, decadence and theorizing. Through associations and using rhythm, she creates new images in which the eye and the mind can wander freely. The patient, inquisitive viewer will be rewarded with a discovery, a moment of revelation and reflection.

Anne-Mie Van Kerckhoven is not just famous for her visual work, but also as a member of Club Moral, a noise band she founded in the 1980s with her husband Danny Devos. In the meantime Mauro Pawlowski and Aldo Struyf have joined as core members. On the occasion of the exhibition In a Saturnian World in the Renaissance Society in Chicago (US) the band once again entered the stage. Later the exhibition travelled to Mu.ZEE in Ostend (BE). Earlier she had been invited for solo exhibitions in various places, including the FRAC Pays de la Loire in Carquefou (FR), in the Kunsthalle Nürnberg (DE), Wiels in Brussels (BE), the Kunstmuseum Luzern (CH), the Neuer Aachener Kunstverein (DE) and the M HKA BE). Her work has been on view at group exhibitions in the Fondazione Sandretto Re Rebaudengo in Turin (IT), the MARTa Herford (DE), La galerie, Centre d’art Contemporain in Noisy-le-Sec (FR), the ICA in Philadelphia (US), the S.M.A.K. in Ghent (BE), the Kunsthalle in Bern (CH), the Museum M in Leuven (BE), the Museum Abteilberg in Mönchengladbach (DE), the National Museum of Singapore (SGP), the Shangai Art Museum (CN), and in many other places. Works by Van Kerckhoven are part of various museum collections, such as the S.M.A.K. in Ghent (BE), the M HKA in Antwerp (BE), Mu.ZEE in Ostend (BE), the Royal Museums of Fine Art of Belgium, the FRAC Pays de la Loire (FR), the University of Chicago (US) and the Muzeum Sztuki in Lodz (PL). (Benedicte Goesaert, thanks to Leen Huet)
www.zeno-x.com