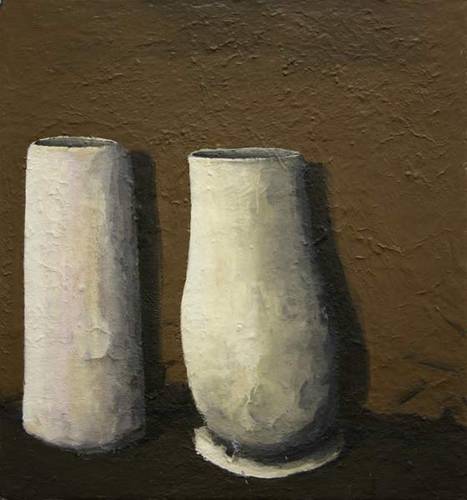 Dirk Braeckman (°1958, BE) starts his artistic career as a photographer of portraits and self-portraits. Later, he chooses subjects of abandoned spaces and deserted rooms, body parts, surfaces of desks, walls, beds, etc for his black-and-white photos. Fragments are enlarged and take up the dimension of an all-embracing still life. With vague contours, the enlarged detail aims at catching a pure and essential, universal and anonymous image. By direct attention for the detail, the miniscule is elevated to auratic dimensions of the icon. The pictures are diaphanous yet suggestive: one recognises a personal narrative behind the large, unframed, black and white, but mainly grey photos.
His work is now included in the group exhibition ‘ClickDoubleClick’, which was held at Haus der Kunst in Muninch and will open in June in BOZAR Brussels.
www.braeckman.be

For more then thirty years Kim Jones (°1944, US) has been working on a consistent oeuvre of drawings, sculptures and performances. War drawings, rat sculptures, combat vehicles and performances as his alter ego Mudman: they all have their origin in the experiences of the young Jones. In the beginning the works were just a war game Jones played for himself with pencil and eraser, but since the eighties they are a main part of his oeuvre.
The same iconography appears in the installation and studies for Mudman. Mudman was born mid seventies when Jones covered himself with sticks and mud and appeared on the streets. These performances are an important source for the other works, where the recycling of materials and motifs, as well as reworking of drawings, installations and performances is the main theme.
A large overview of his work will be shown at two venues in the US at the end of this year. Together with the exhibition a large monograph will be published on the artist and his work, written by Rob Storr.

Naoto Kawahara’s (°1971, JP) recent paintings are based on the works of masters including Balthus, Bonnard, Claesz, Dürer and Seiji Togo. After staging and shooting his subjects with a Polaroid camera, Kawahara searches for other possibilities by re-creating them, by ‘painting” them closely. While keeping the master works characteristics, he makes us sense his uniqueness trough interpretation. Kawahara’s style combines the Japanese painting tradition and contemporary Western and Eastern visual vocabularies.

Jenny Scobel’s (°1955, US) portraits are executed in graphite and oil paint on prepared wooden panels. The head of known personalities, ranging from Virginia Wolf to Michelle Pfeiffer, and anonymous men and women are cut out from print media or found photographs. The images are then spliced onto various iconic torsos. The figures are deformed, as the proportions of head and body are not always compatible.
Again and again, the same model is introduced in a slightly altering, ever prominent décor. The frontal and central, outwardly piercing half-length women are combined to effects of additional estrangement with backgrounds culled from the 1930s and 40s. Set against an intimate background of wallpaper with floral or other decorative patterns, the figures are unsettling, probing psychology. Scobel’s paintings allude to beauty and its underlying calamity.
Scobel will have a solo show in Galerie der Stadt Backnang (DE) next month and her work is now included in a group shows in London. A small publication on her work was published this year for the exhibition in Backnang.

Anne-Mie Van Kerckhoven (°1951, BE) is highly interested in the relation between art, science, politics and social issues. In the early 1980s, the fascination for mental operations led the artist to approach the scientific world. Hence, she positioned herself within a reviving spiritual tradition where scientists and artists collaborate and attempt to achieve a more human society.
The subjects of AMVK are frequently just on the verge of permissibility or 'normality'. Her multi-media installations, exploiting audio, video, computer and Internet, demonstrate a violent use of colour and the harsh technological materials might put the viewer in a compromising position. AMVK looks at the obscene in society from a female point of view. Recent years, she has been working with images where women and interior scenes play the key role. Her aggressive pictures drift on nihilism. However, she refuses to take a moralising stand.
For the moment AMVK is working and living in Berlin (DE) for a year as a part of the German art program D.A.A.D. (Deutscher Akadeischer Austausch Dienst). Together with Dirk Braeckman and Luc Tuymans she will be part of a Flemish group exhibition in Vladivostok (RU) later this year.
www.clubmoral.com/amvk/

Cristof Yvoré’s (°1967, FR) paintings originate from a random anecdote: a façade, a corner of an uninhabited room or a vase with flowers. However, this personal memory and autobiographical starting point dissolves during the act of painting. The forcefulness whereby the paint is applied on the canvas brings about a distinctive texture that compels the attention of the viewer. Hence, the initial descriptive motif, by which the painter was triggered to create its representation, is transformed into a pure pictorial element.
The artist wants to escape all aesthetic dogmas. Yvoré’s work is liberated from all contemporary tendencies. However, his oeuvre is rooted in a decades-old artistic tradition of serious, contemplative and self-critical practice of painting. Simultaneously, Yvoré’s work exudes the inventiveness of a determined mind, pushing the limits of the painterly conventions.