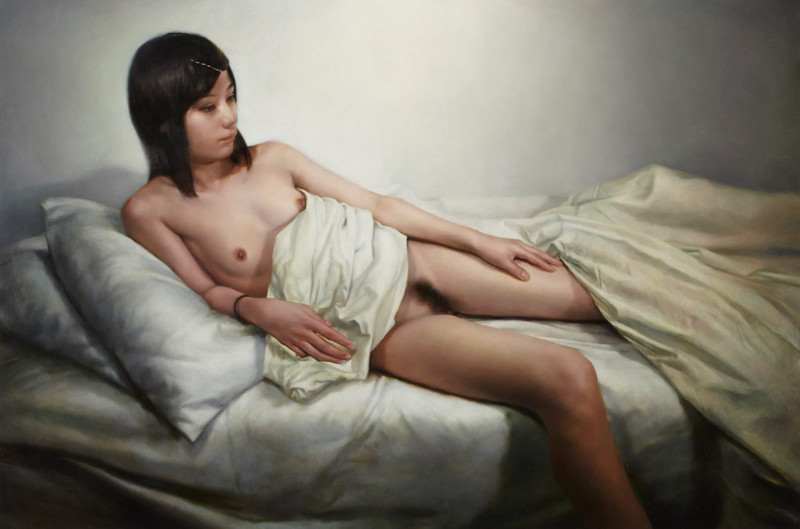 ANTWERP – Zeno X Gallery is proud to announce a second solo show with the Japanese artist Naoto Kawahara (°1971, Tokyo). Kawahara presents seven new paintings in this gallery show entitled ‘Alraune’. A title that has been chosen for its mysterious and suggestive connotations. ‘Alraune’, also known as Mandrake, is a plant with a shape resembling the human figure and would have its roots in ancient magic rituals. ‘Alraune’ also refers to the name of a leading female character that appears in some specific movies and novels.

Although Naoto Kawahara has always been attracted to painting, he began his studies with industrial design. After finishing, he decided to leave Japan for a while to focus on painting. He lived for four years in Italy, a land known for its great history of ancient masters, where he studied at the Lorenzo de Medici Institute in Florence. During these years he became specialized in aesthetical classicism and the techniques of Renaissance masters. Painting in the Classical Western tradition was for Naoto Kawahara, as a Japanese artist, kind of a cultural clash. This confrontation made him reflect on the history of Japan and its ancient tension with the West. Before 1854 people couldn’t travel abroad Japan and Western influences were forbidden. Although this situation changed due to American intervention, Western Art stayed a threat for a longtime.

This former opposition between Japan and the West fascinates Kawahara and inspires him to bring both cultures together. In his paintings he refers to works by great Western artists. Each time he reproduces a composition of a famous work of art. For this show works by Balthus and Pierre Bonnard, photographs by Ruth Bernard, Man Ray and Horst P. Horst and drawings are part of his primary source of inspiration. Despite appropriating elements of existing works, Naoto Kawahara emphasizes there is a difference with copying:

I re-interpret ‘painting as painting’ by mentally re-imagining, re-picturing, the masterworks. I search for a model, photograph it in the appropriate setting and embark on the process of painting. By translating existing paintings, I try to create another image of them. I find it particularly satisfying if my works are not regarded as mere copies.

In his paintings he always interchanges the Western model for a Japanese nude. In the preparation of each painting he asks a model to reenact a pose. After having taken the photograph of the pose, he starts painting. The Japanese nudes appear in the way beauty and eroticism is depicted in Western history of art. An approach adopted in Japan since 1920 but didn’t correspond with the traditional Japanese view on beauty and eroticism. During the process of painting, Naoto Kawahara objectifies the human figure and all attention is drawn on the naked body. Naoto Kawahara paints in a classical and realistic way that mostly doesn’t correspond with the technique used in the original work. His works have similarities with the original one but when he also changes the original colors and small details like the texture of present textiles, a distance is emerging.
www.zeno-x.com