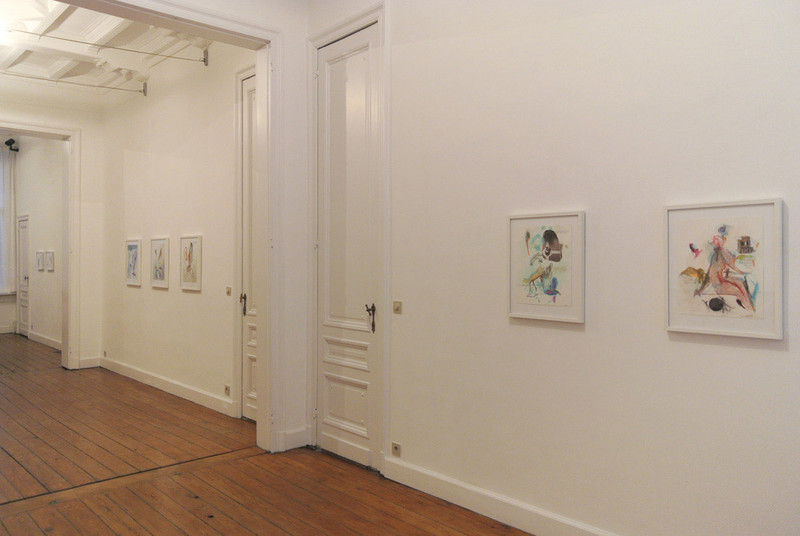 The Belgian artist Dirk Braeckman (°1958, Eeklo) travels along empty and desolated places, abandoned by human beings. Instead of reconstructing a possible storyline or history of the location, his eye is touched by the emptiness or by the present texture of textiles, floors, walls and furniture. Also when a person dominates the scene, Braeckman focuses on the skin and the way light reshapes the body. In black and white tones, he captures the moment where curiosity, registration and desire comes together.
The works by Yun-Fei Ji (°1963, Bejing) are closely related to the ancient culture of China. He paints according to traditional Eastern art-making practice and respects centuries old techniques such as calligraphy. With translucent ink or paint based on natural pigments he creates layered images on handmade rice paper. Although the iconography seems very conventional, the content isn’t at all. Yun-Fei Ji reflects on the current situation of China and on the influence of the communism. In ‘Marshal Peng Dehuai and his hungry ghosts’ he depicts the respected Marshal Peng who was the only one criticizing Mao’s ‘Great leap forward’.
The works on paper by Kim Jones (°1944, Los Angeles) refer to his performances as Mudman, his alterego. It was arround 1975 he appeared for the first time as Mudman in the streets of LA. For every performance he pulls a nylon panty over his head, covers his body with mud and wears a selfmade construction of wooden sticks on his back. His work is influenced by his experiences as a soldier during the Vietnam war and by the illness that kept him in a wheelchair between the age of seven and ten. Besides performances, he makes installations, war drawings and works on paper.
Kim Jones likes to change works over time. In the selection on view he paints on recycled photopgraphs of his performances, which are an important source for all kind of works he makes.
Also pictures in magazines can be a source to transform and mutate the original image. Person change into strange creatures, skeletons or androgynous figures lost in a complex world.
The universe of Anne-Mie Van Kerckhoven (°1951, Antwerp) is a one in which philosophy, science and fashion all come together. Her mind is never fixed in one time zone. Past, present and future are always struggling with each other. Also in the media she uses, one can notice her strong desire for innovation and experimentation. Besides working on paper, she explores the possibilities of computer graphics, printing and video. Also music is part of her artistic language. Together with Danny Devos she creates experimental music under the band name Club Moral from 1981 onwards. Anne-Mie Van Kerckhoven has a special interest in the mystery of the cosmos and deals with this in a serie of drawings such as ‘In a saturnian world’ and ‘Observations Saturniennes’. For this serie she’s influenced by the book ‘Poèmes Saturniens’ (1866) by Paul Verlaine. After reading this, she imagines Saturnus as the planet of the savage and associates it with wealth and waste.
www.zeno-x.com