Bense and the Arts 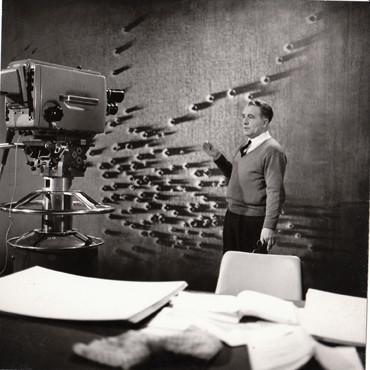 For the 100th birthday of the philosopher Max Bense, ZKM will present an exhibition showing his international impact on the fine arts and literature, which can be compared to that of Umberto Eco and Marshall McLuhan. The exhibition, which carries forth the ZKM series “Philosophy and Art,” presents Bense as poet and author, scholar of the arts and literature, as well as exhibition curator and publicist. Bense, who was active in Stuttgart from 1949 until his death in 1990, propagated an aesthetic of “technical existence” in Germany of the post-war era, which antedated by decades the media-theoretical turn in literature and the humanities that occurred in the 1980s. His thoughts on literature and art were part of a comprehensive philosophical picture of the world that showed a natural-science and “technical reality” of civilization and was aimed against German post-war culture’s romantic and mythologizing trends. Already back then, Bense established a concept of culture that—in the Enlightenment tradition—included the intellectual history of mathematics, physics, and engineering.

Max Bense, who was born on 7 February 1910 in Strassbourg, studied physics, mathematics, mineralogy, geology, and philosophy at the universities of Bonn and Cologne, and received his PhD in 1937 with a thesis on “Quantum mechanics and existential relativity.” He first worked as a physicist for Bayer AG in Leverkusen. After his war duties, Bense pursued an invitation from the University of Jena. But he already fled to West Germany in 1948 and was appointed first as visiting professor in 1949 and then as professor of philosophy and the philosophy of science in 1950 at the Technische Hochschule Stuttgart. He also taught at the HfG Ulm, the Hochschule für bildende Künste Hamburg, and in Rio de Janeiro.

Bense began pursuing his literary and artistic tendencies as publicist and radio playwright during his studies. In Stuttgart, he also began to organize exhibitions, first at the Galerie Gänsheide beginning in 1957, then at the study galleries he founded at the Technischen Hochschule Stuttgart. He wrote about numerous fine artists and poets, among others, about Max Bill, Lygia Clark, Alberto Giacometti, Almir Mavignier, Henri Michaux, Mira Schendel, and Paul Wunderlich as well as Alfred Andersch, Haroldo de Campos, Reinhard Döhl, Eugen Gomringer, Francis Ponge, Nathalie Sarraute, and Gertrude Stein. In addition to his exhibitions and essays, Bense also created other forums for the arts: i.e., by founding the magazine “Augenblick” (1955) and “reihe rot,” 1960, which he and Elisabeth Walther edited, which published, among others Helmut Heissenbüttel, Ernst Jandl, Friederike Mayröcker, and Diter Rot. At the same time, beginning with semiotics and news technology, beginning in the mid-1950s he developed an “information aesthetics” that influenced concrete and kinetic artists throughout Europe and made him one of the seminal theorists of the pioneering era of European computer art. The exhibition with publications by Max Bense and prints, paintings, and sculptures by artists that were important to Max Bense, or were influenced by him, is supplemented with manuscripts and photos, as well as recordings of his radio plays and television appearances. They show the philosopher and his view of “art in an artificial world” (1956).