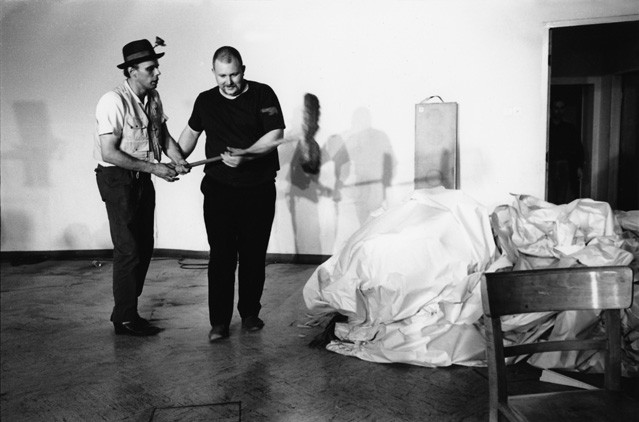 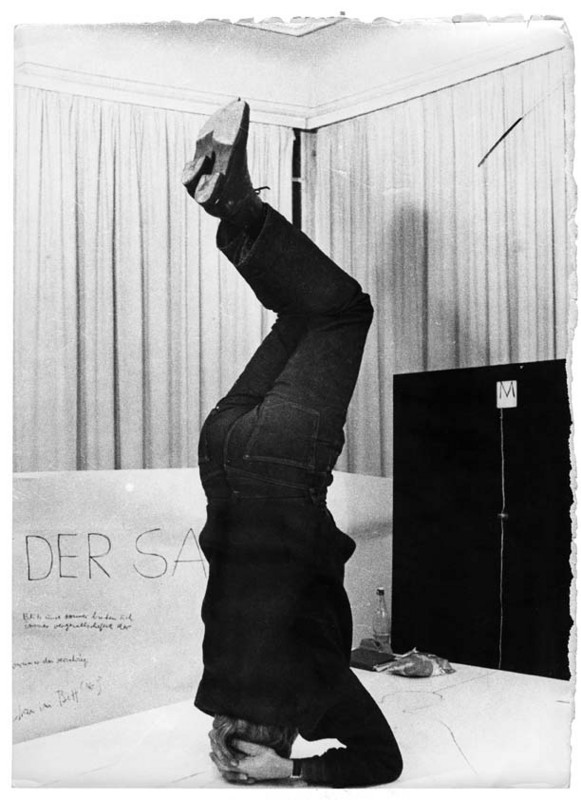 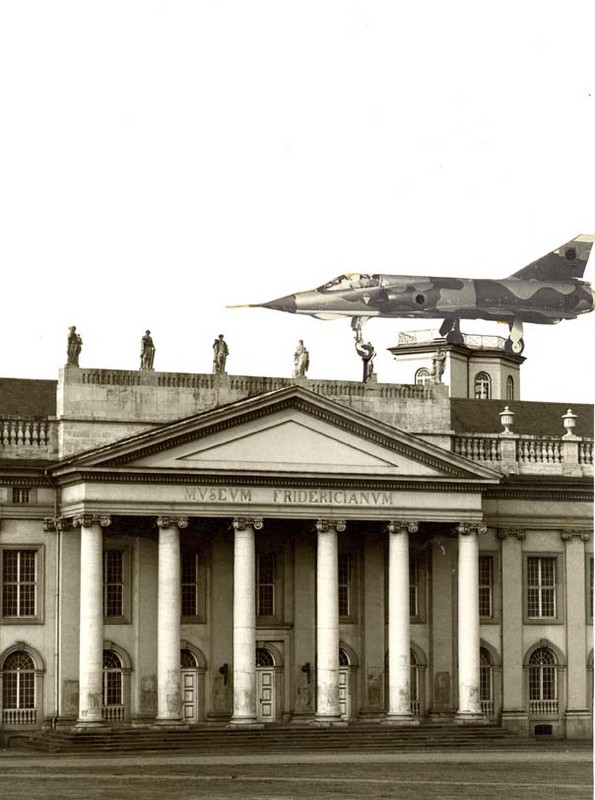 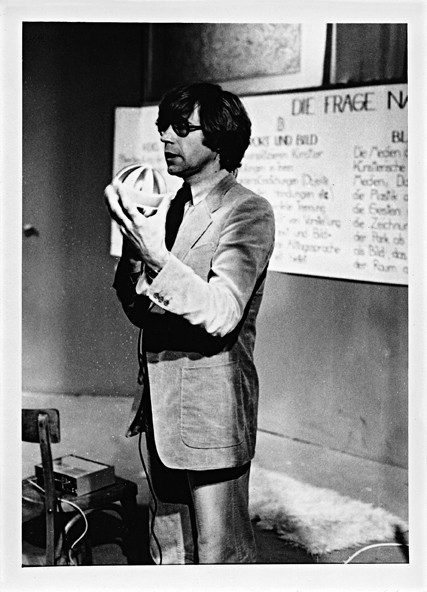 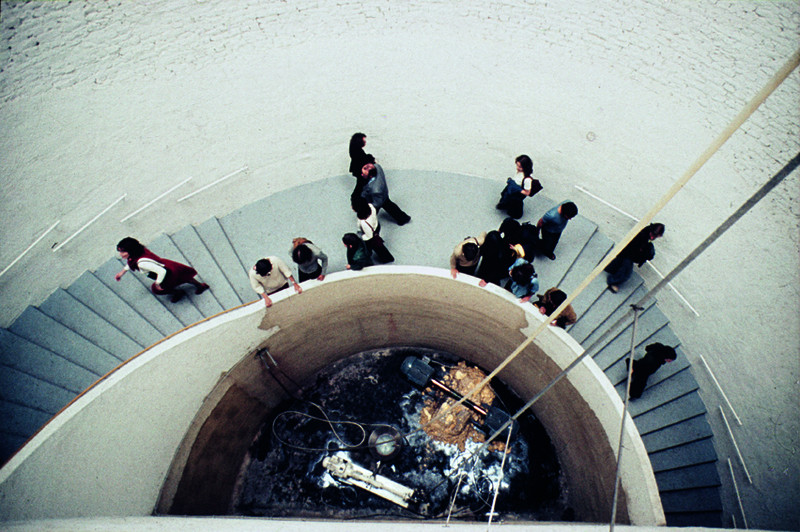 Joseph Beuys, Honigpumpe am Arbeitsplatz at the documenta 6, Museum Fridericianum
1977 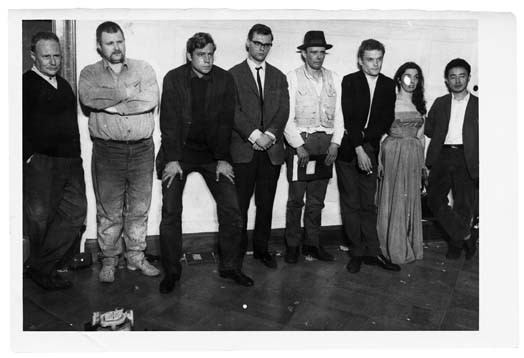 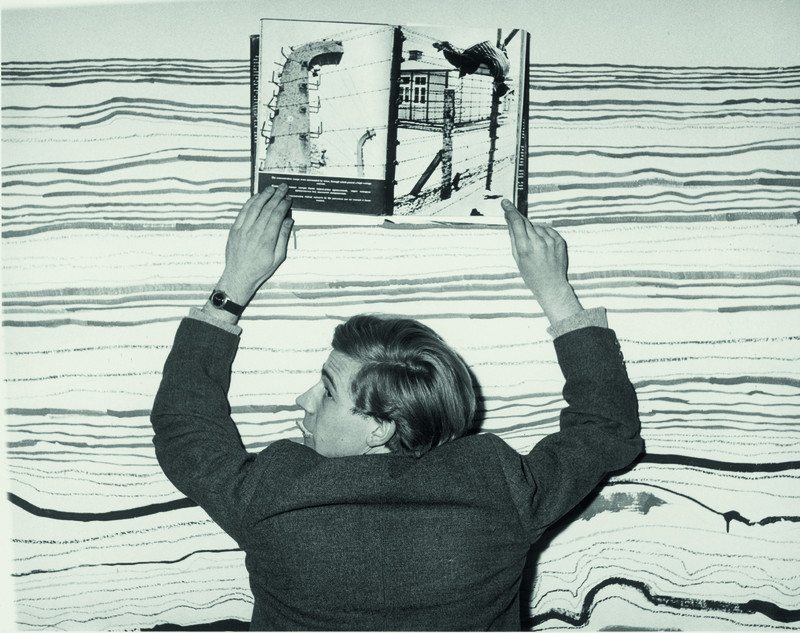 Bazon Brock, Die Linie von Hamburg
Action together with Friedensreich Hundertwasser at the University of Fine Arts of Hamburg,
December 18–20, 1959 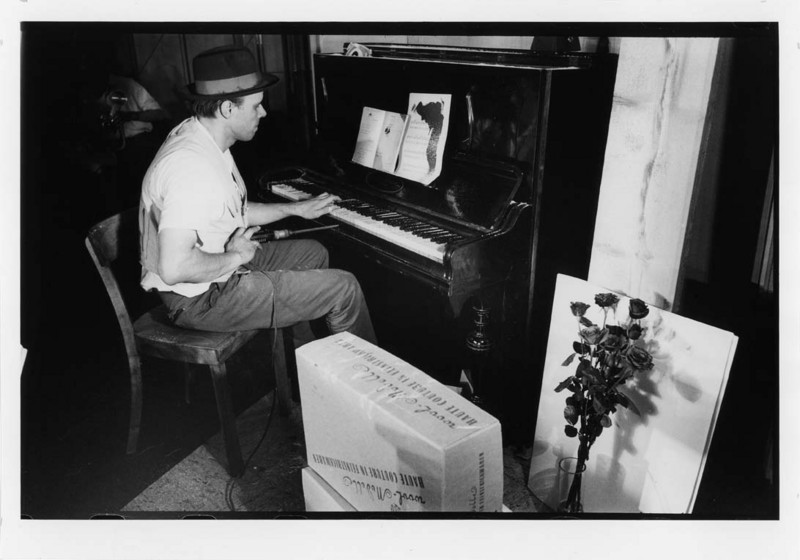 Joseph Beuys, Bazon Brock and Wolf Vostell, the three most important German Action artists of postwar modernity, will be presented for the first time together in a large-scale group exhbition. The artists, all of whom were friends and who ap-peared together at important actions and exhibitions throughout the 1960s, evolved their own unique style-defining approaches, thereby pursuing the radical emancipation of the individual and the reform or revolution of life. A new perspective on performa-tive arts is evolved by way of the joint presentations of these three different approaches to performativity, today courted in all museums of the world.
To date, art history has only separately treated the work Joseph Beuys, Bazon Brock and Wolf Vostell without reference to the respective na-tional and international contexts. Not only were important individual aspects and achievements of each of the artist’s personalities conse-quently overlooked: due to the lack of a contextual overview the im-portance of these three artists for the performative turn has also been lost. The artists, all of whom were fiends, made joint appearances at important events during the 196os, such as the Festival der Neuen Kunst am 20. Juli 1964 in Aachen, the Life Sendung of the Second German Television Channel for the series Die Drehscheibe (1964) and the so-called 24 Stunden Happening at Galerie Parnass in Wuppertal (1965). Through their collaborative work has been researched and com-prehensively exhibited for the first time, new perspectives are opened up both on the artistic output of these three artists and the art of the post-war period.
The exhibition shows that, each in their own way, the three action artists created influential and formative stylistic approaches to performativity, and contributed to the formation of an augmented concept of the work – such as sculpture as action and the inclusion of the public. It becomes apparent, furthermore, that all three artists share a common thematic focal point in their critical assessment and treatment of the Second World War and its ramifications. A further aspect shared by Joseph Beuys, Bazon Brock and Wolf Vostell that becomes understandable in the exhibition, is the new definition of teaching. The three artists con-ceived of teaching as the art of performance the core of which was mediation and enlightenment, action and agitating as well as discourse and demonstration. Initiated by actions, images and discourse, a trans-formation of viewer consciousness is then achieved which leads to the radical emancipation of the individual. Accordingly, civil society and democracy constitute the core of Beuys’, Brock’s and Vostell’s actions and demonstrations. Whereas artists of the 1950s attributed greater significance to the past, especially to the Holocaust, their common con-cerns during the 1960s were the conception of social utopias – even though their various approaches towards this mutual goal took very different forms.
With the exhibition Beuys Brock Vostell, the ZKM | Karlsruhe deepens its focus on performativity and participation. Following the presentation of works by the pioneers of performance art in the exhibition Moments (2012), and the critical examination of the augmented concept of the work, as in the exhibition Franz Erhard Walther. Space by Action (2012), three key German artists of postwar modernity Joseph Beuys, Bazon Brock and Wolf Vostell are now set to be presented for the first time in a large-scale show in 2014. These artists had already recognized the new tendencies of leading art out of the studio and into public space, and implemented these in artistic practices as early as the 1950s.
Curator: Peter Weibel
Co-curator: Eckhart Gillen
In cooperation with: Eva Beuys, Bazon Brock, Mercedes Vostell


Supporting Program
Beuys Brock Vostell. Early Approaches to Performativity
Symposium June 27–28, 2014
The symposium is dedicated to the performative aspect in the artistic productions of Joseph Beuys, Bazon Brock and Wolf Vostell, thereby outlining the way in which performance unfolds in the work of these three German postwar artists. What possibilities are there for the de-scription, documentation, contextualization and museum presentation of these forms of performative expression? Contributions by Siegfried Zielinski, Ursula Frohne and Christian Katti, Sven Lindholm, Petra Maria Meyer, Monika Schmitz-Emans, Christoph Zeller, Ulf Jensen and many others, cast light on the actions of the three artists by drawing attention to common themes, thereby showing the parallels and differences in their works both with respect to artistic self-presentation and in the ap-proaches to the viewers.

Publication
A comprehensive volume of sources and documentation, including numerous previously unpublished illustrations and text materials on the exhibition is scheduled for publication by Hatje Cantz. Edited by Peter Weibel, the 600 page publication will be distributed and sold throughout German-speaking countries.