The Age of Media with Life-like Behavior 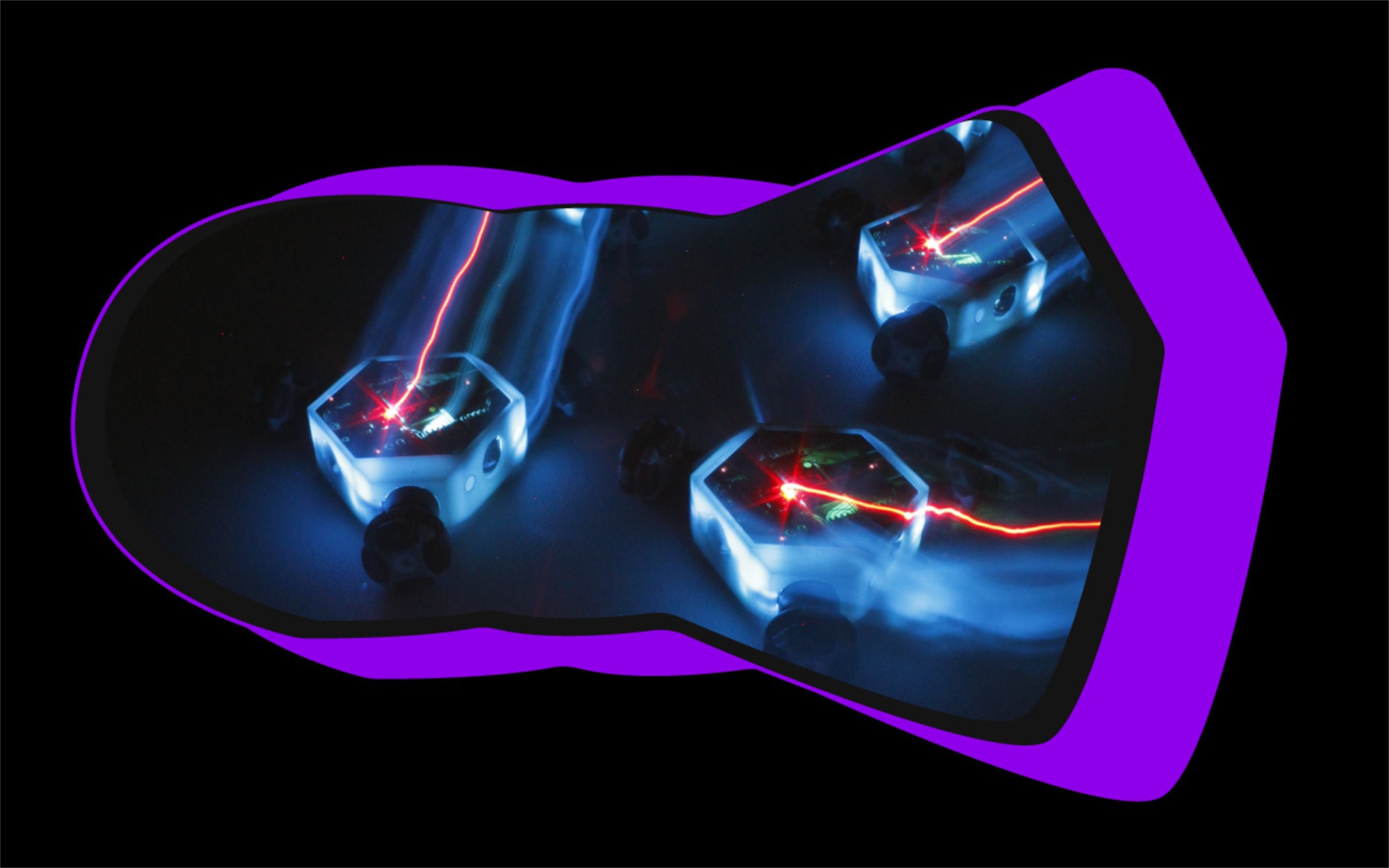 BioMedia. The Age of Media with Live-like Behavior © Katrin Hochschuh and Adam Donovan, Visual: The Rodina 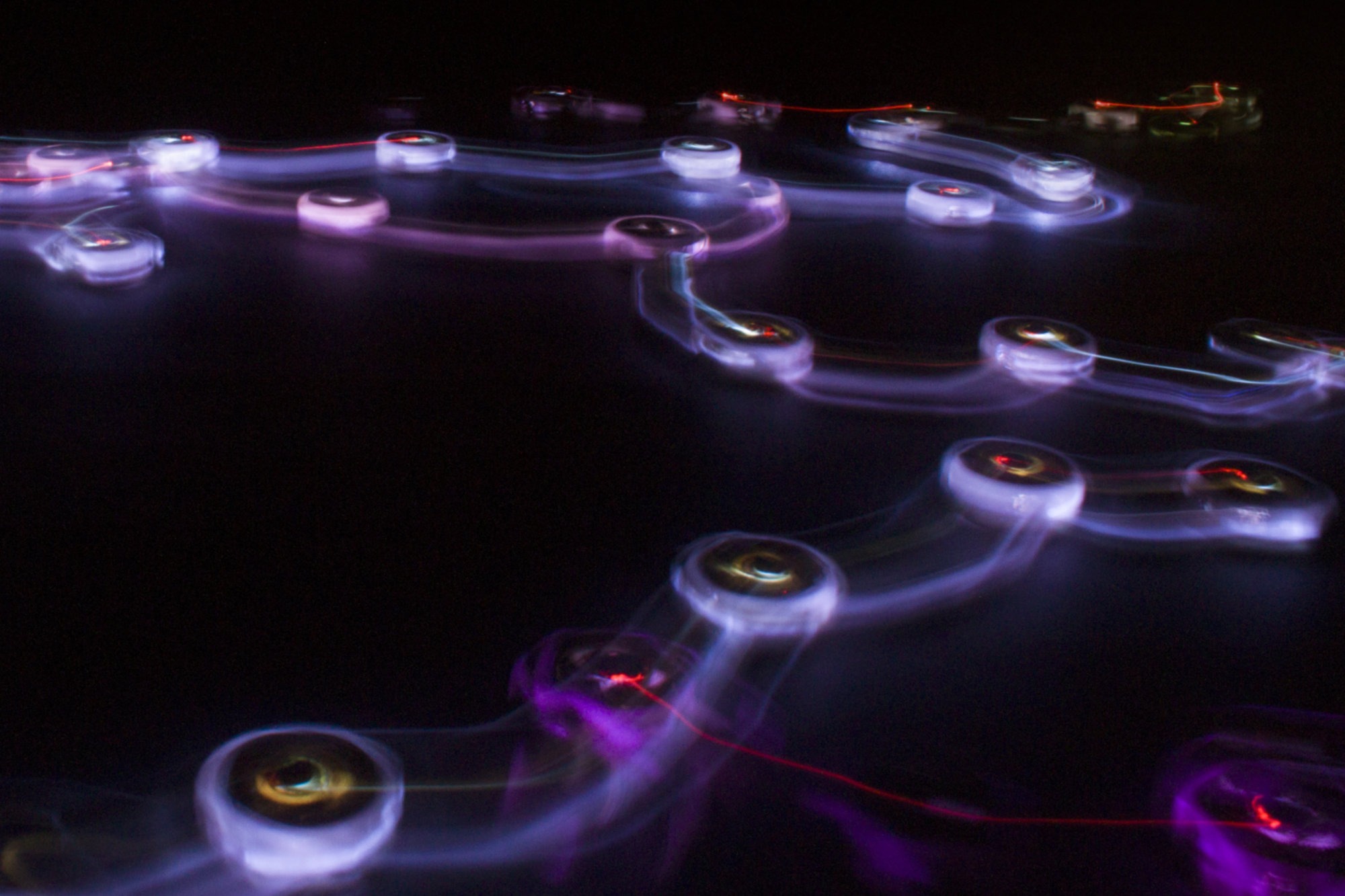 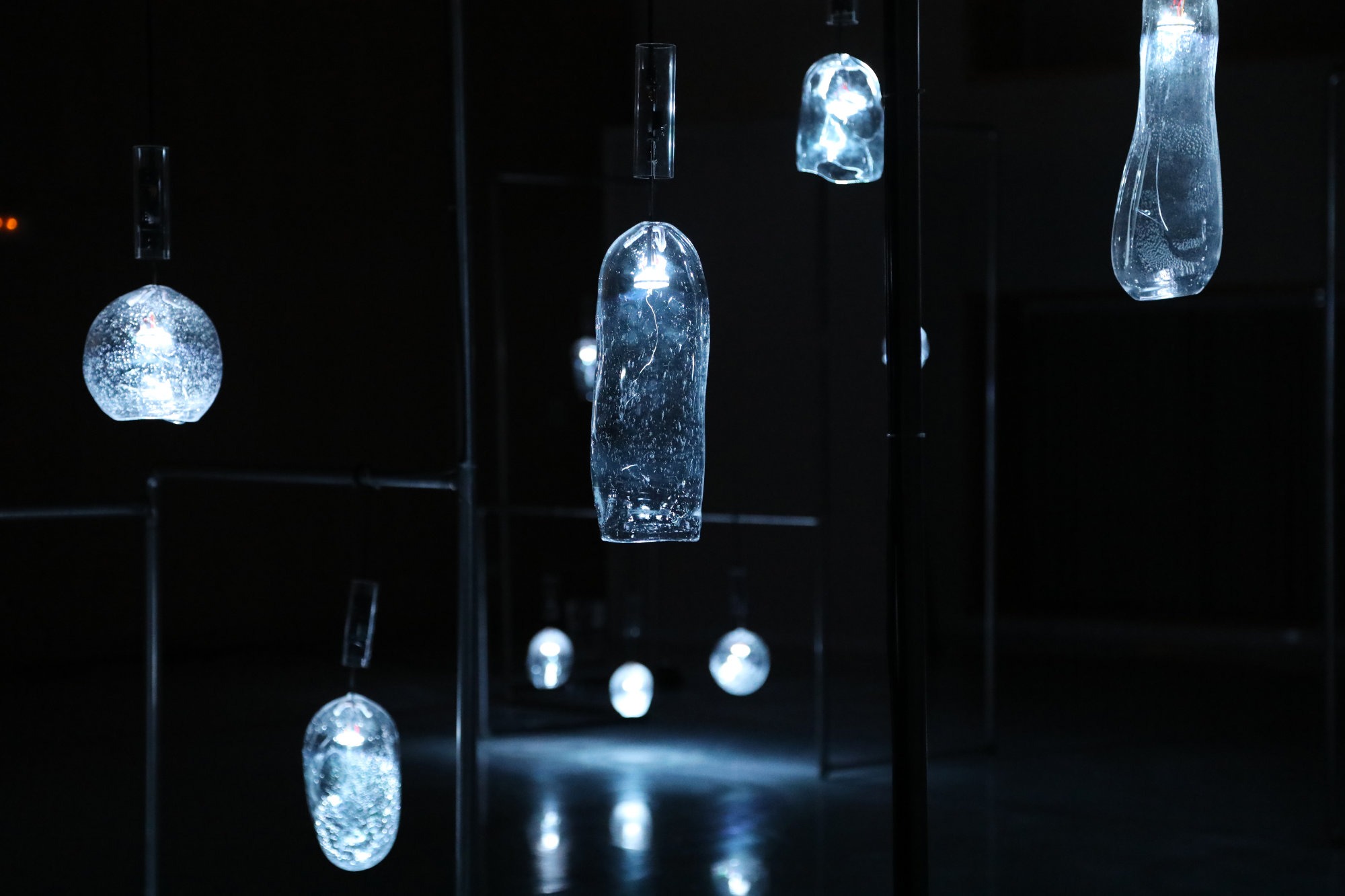 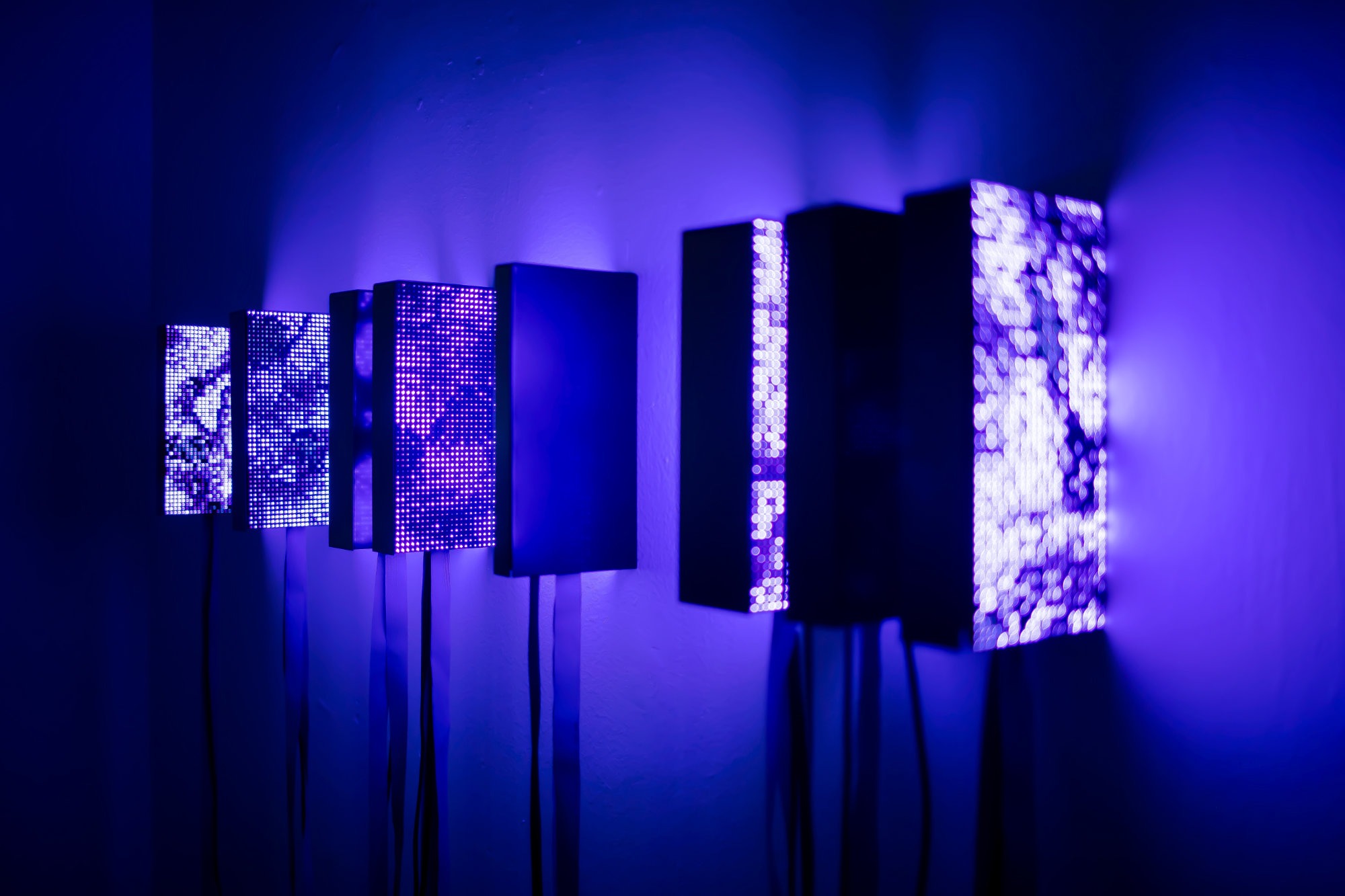 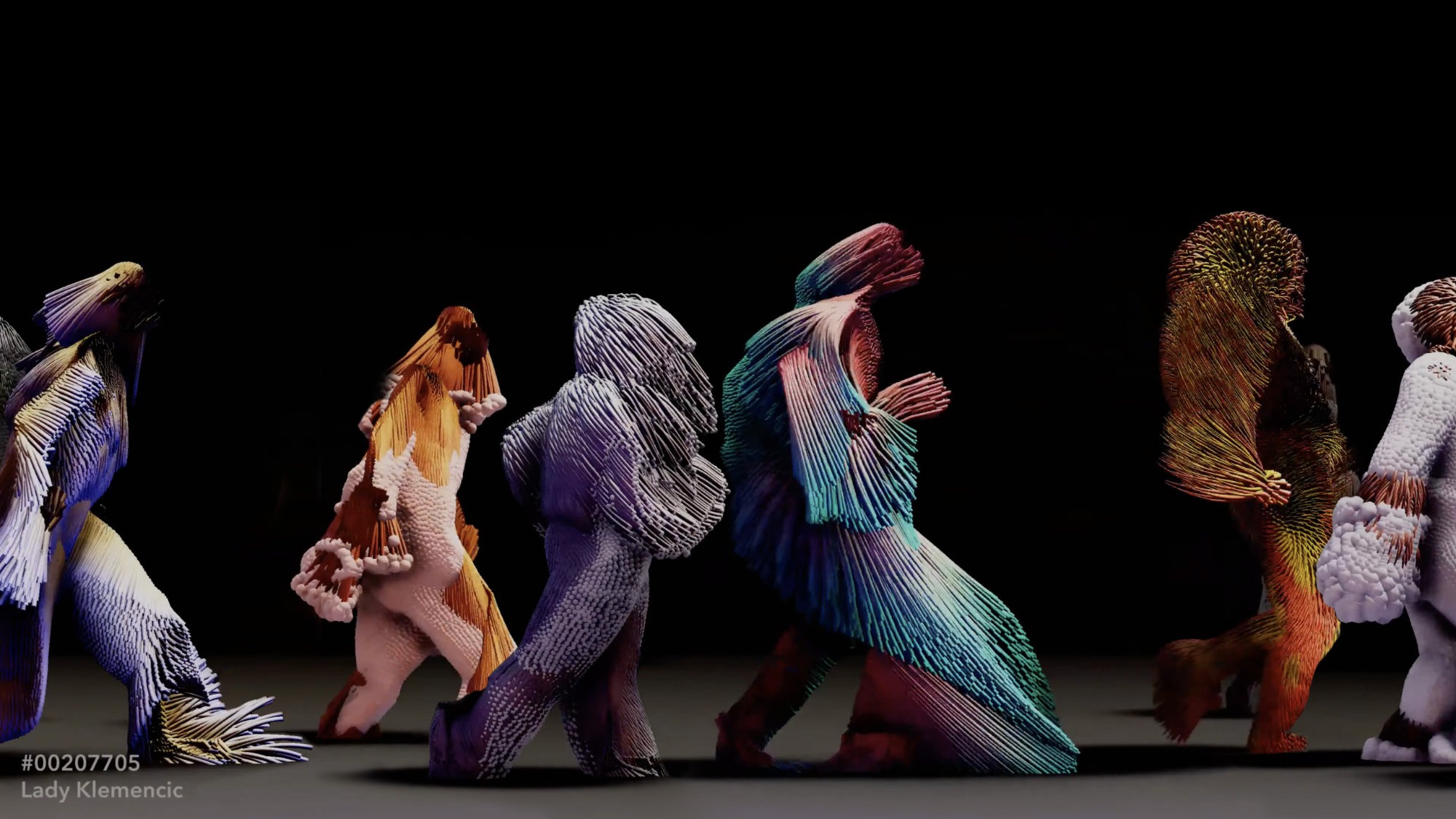 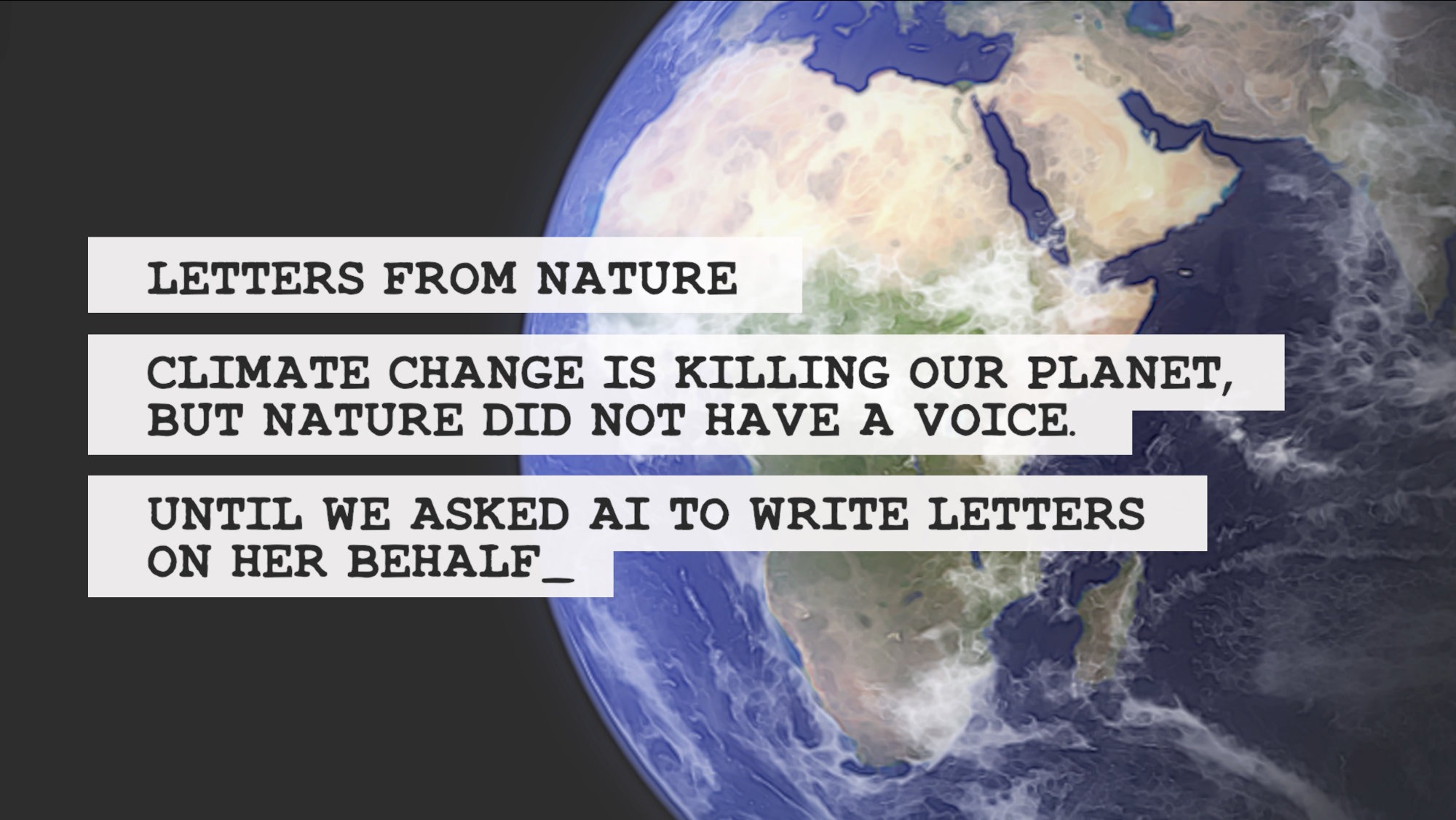 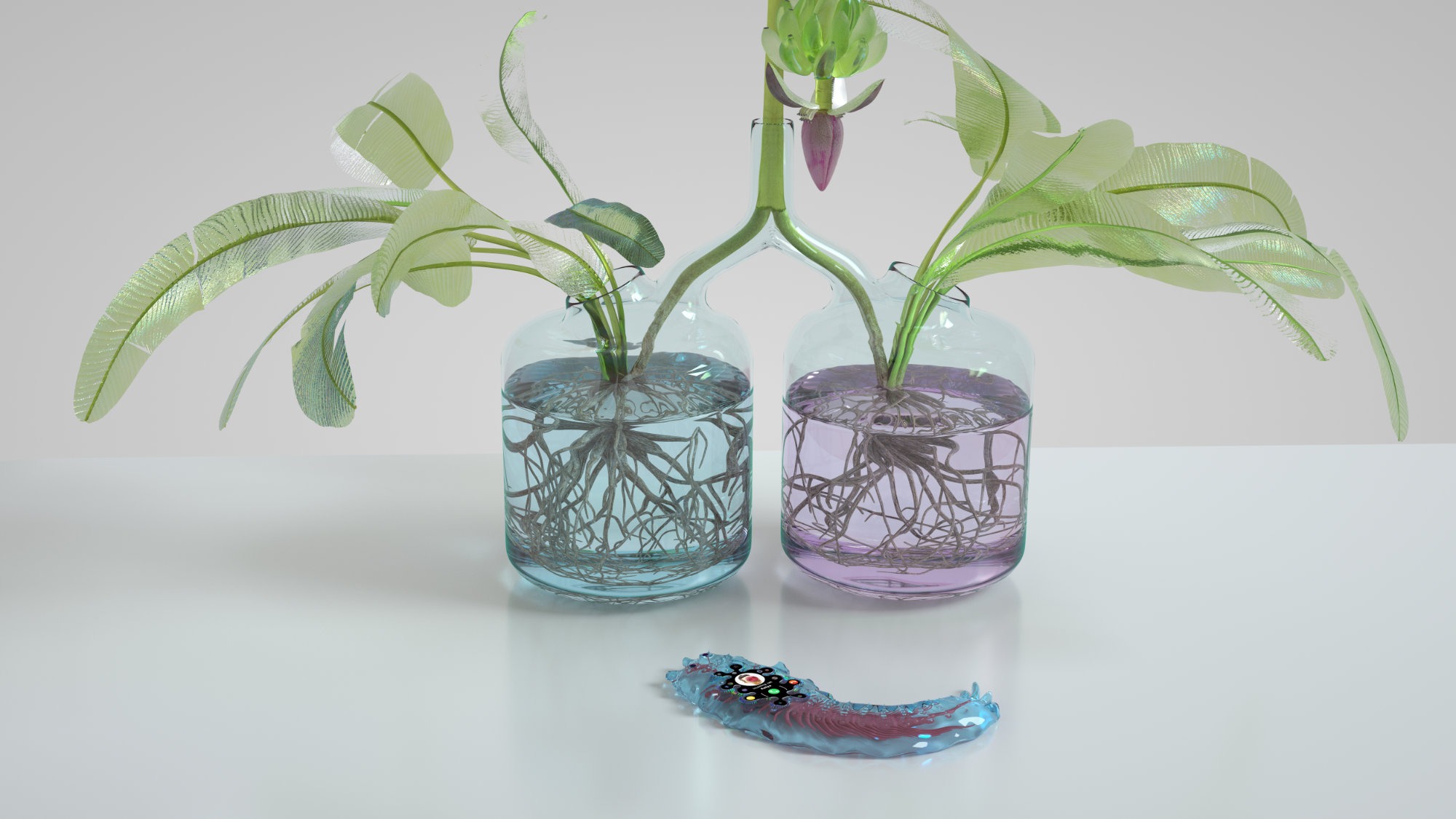 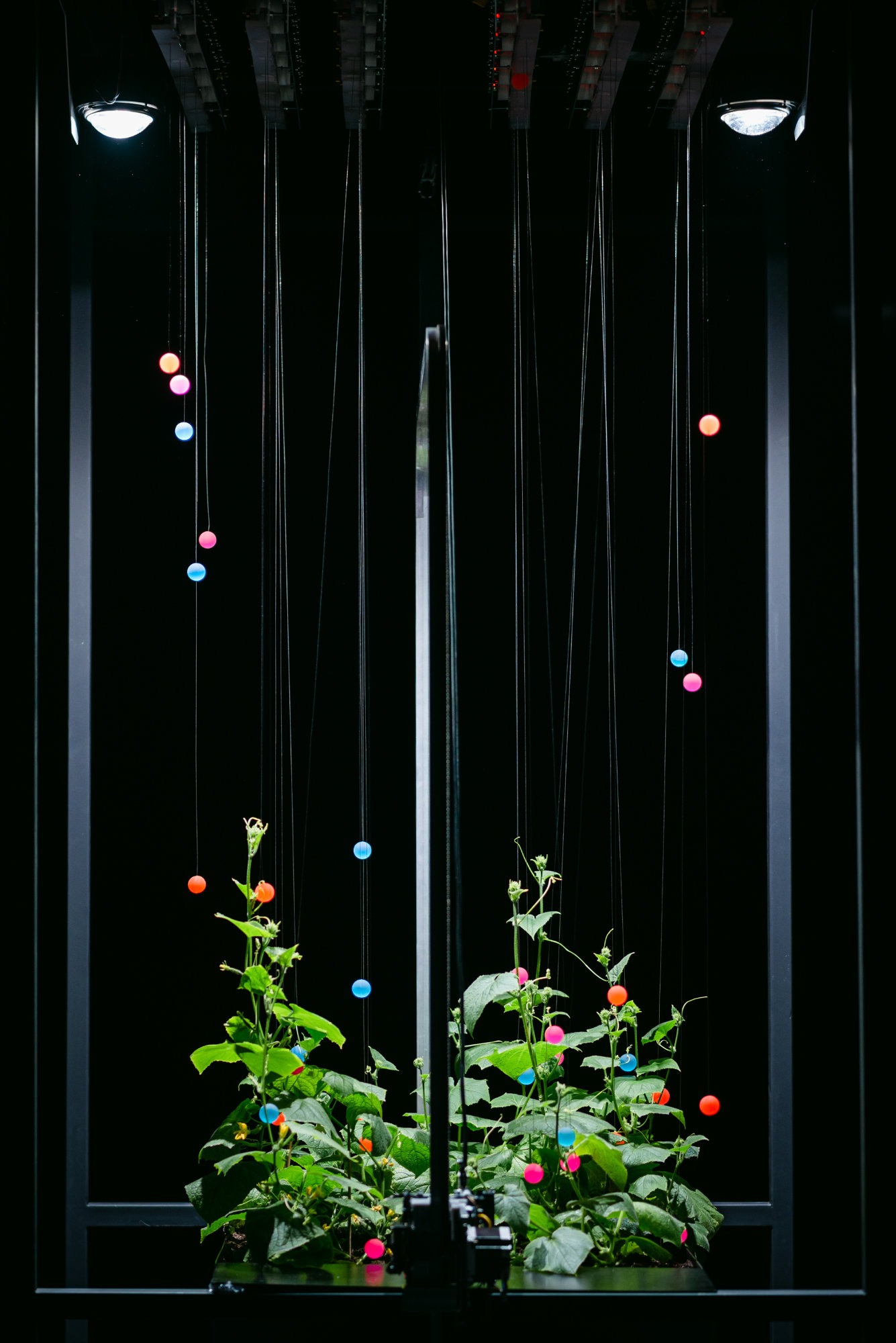 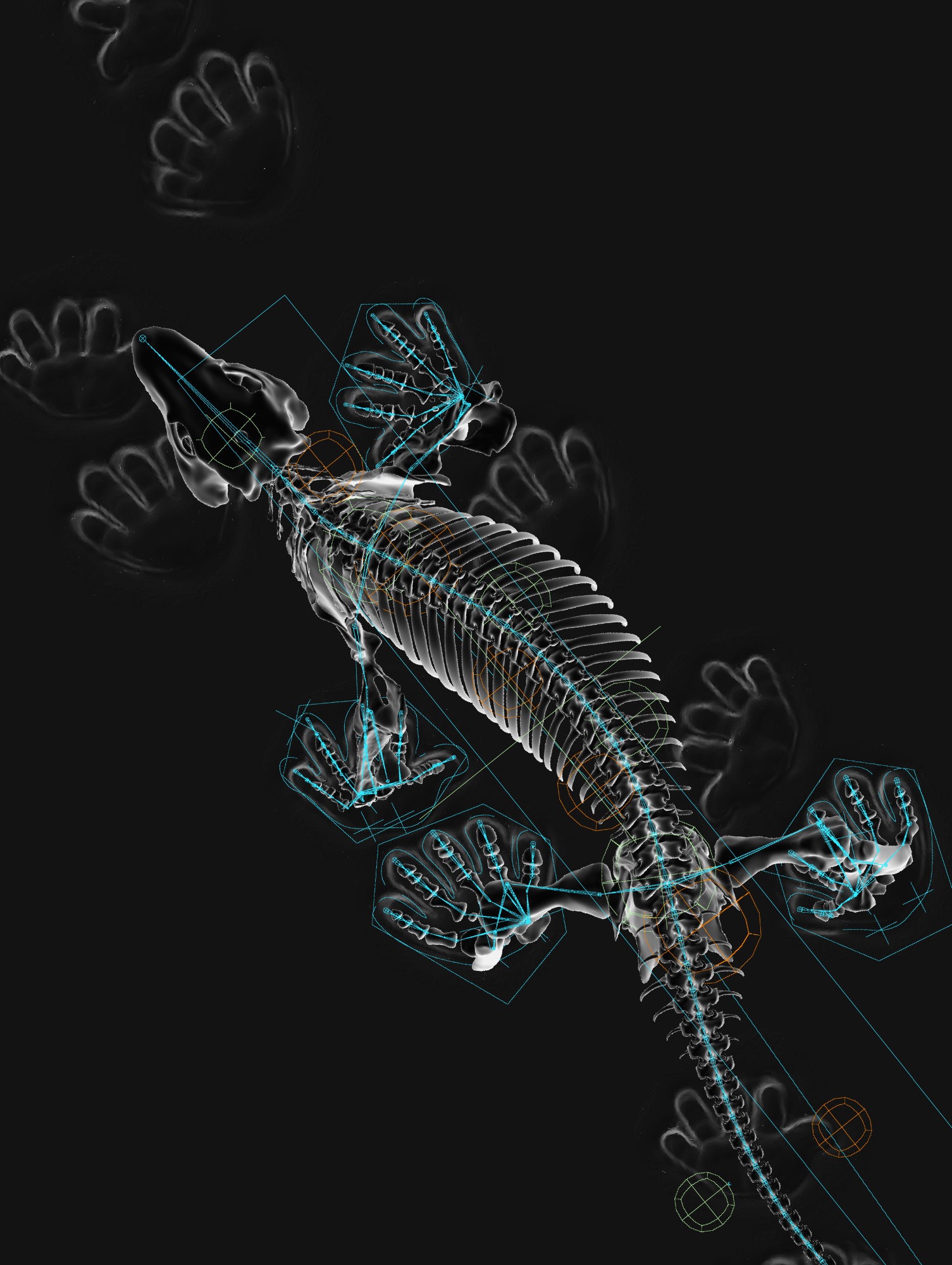 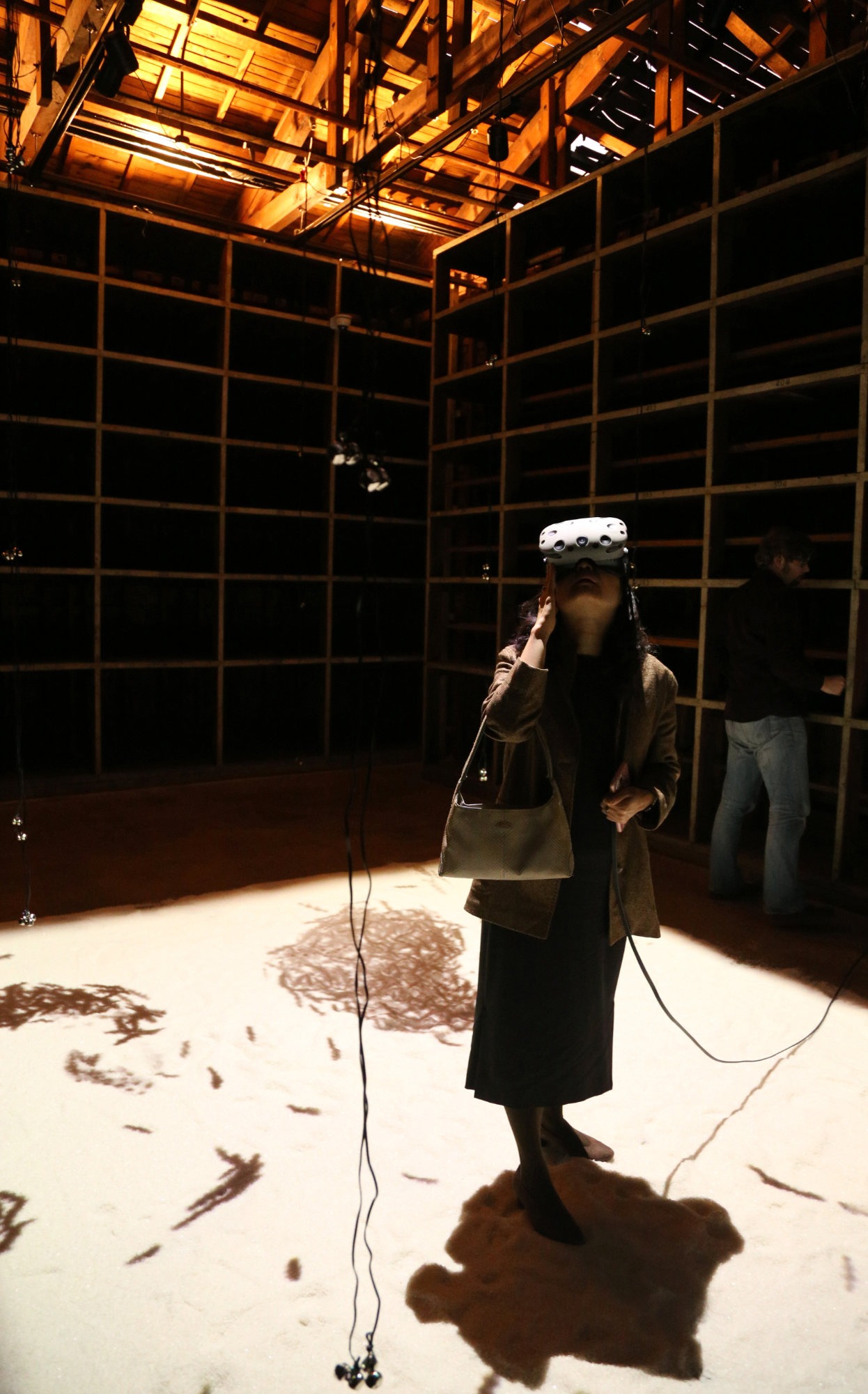 Artificial Nature (Haru Ji & Graham Wakefield), »Conservation of Shadows«, 2017, VR installation © Artificial Nature © Photo: Seoul Museum of Art Chang-go
What happens when an artificial intelligence learns from living cucumber plants? Why do robots form a swarm when a human passes by? What is it like living with the extinct Kaua'i ʻōʻō bird? Who or what defines what is alive today now that intelligence and empathy are no longer the exclusive preserve of humans? The BioMedia exhibition is an invitation to learn about and discuss possible forms of coexistence between (non)human and artificial organisms visionarily worked out by about 60 artists.

For centuries, humans have attempted to simulate life through the movements of machines. In the twenty-first century, digital techniques and artificial intelligence have expanded these possibilities. The generation and storage of digital images enables image content to be immensely variable, and makes media systems behave more and more like natural organisms. “BioMedia” are emerging that will shape the twenty-first century. This exhibition provides a glimpse of these developments and seeks new concepts and definitions of life – all the more timely in light of the existential threats to life on our planet.

At a time of existential threat to our planet, the search for new concepts and definitions of life is not just a philosophical endeavor; it is now a responsibility to life itself. New methods and ideologies need to be explored to approach the question of how life can be sustained in a community of (non-)human and technological entities – especially against the backdrop of the profound ecological crisis, mass extinctions, and the human-made climate catastrophe.

“The nineteenth century was the century of motion machines, and the twentieth century was the era of motion media. The twenty-first century will be the era of biomimetic media that exhibit lifelike behavior. The exhibition BioMedia. The Age of Media with Life-like Behavior provides a first glimpse of what is to come.” – Peter Weibel, Artistic Director of ZKM.

In addition to motion, media systems simulate a variety of aspects of life, from intelligence to the empathy of living organisms. It is the media that exhibit lifelike behaviors that we call BioMedia or biomimetic media.

The exhibition explores different forms of artificial agents and environments as well as their behaviors and interactions with other entities within hybrid ecosystems. Some are digital, computer-generated and computer-simulated systems that evolve on a screen, while others are complex adaptive robots that are physically present in space and exhibit biomimetic behavior such as search mechanisms, swarm intelligence, self- preservation, and so on. Through unpredictable responses to stimuli, they mimic, demonstrate, and simulate lifelike behavior.

The entities on display raise fundamental questions about the self- preservation of inorganic life for they demonstrate their ability to interact with each other and with human and nonhuman beings through two- dimensional images, three-dimensional objects, and multi-dimensional quantum models. It is dynamic systems such as these at the intersection of art and science that are explored in the exhibition – both in terms of their potential real-life applications and their ability to open up new perspectives on urgent contemporary issues.

BioMedia provides insights into possible forms of coexistence between organic and inorganic life forms. Thereby the existence of organic life and artificial entities are not mutually exclusive. Rather than thinking only in terms of competing or mutually exclusive concepts, the BioMedia exhibition proposes imagining relationships with artificial agents as mutual dependencies and involvements.

Continuing a biophilic approach that recognizes the diversity of life on our planet, BioMedia also proposes that not only carbon-based life but also inorganic life forms should be included in ecological and social networks. The exhibition also challenges the taxonomies developed by the natural sciences and the compartmentalization of different branches of science and art. The sympoetic community of the future will welcome artificial entities as an integral part of a system of networks, relationships, and connections between different disciplines in order to address urgent problems and advance new solutions. In such a community, artificial entities may take on the role of mediators, regulators, designers, attenders, or supervisors.

Who or what defines or decides what is alive and what is intelligent? Are we merely projecting our own behavior and mindset onto inorganic forms? How do humans and artificial agents coexist today — and how will it develop in the future? Can artificial life forms be empathetic? What ethical questions must be asked in the age of BioMedia? How can we prevent artificial life-forms from reproducing human biases? How can the design and development of technologies be conceived to be more participatory? These are precisely the questions that the exhibition BioMedia. The Age of Media with Life-like Behavior addresses.

Catalogue
It is planned to publish an approx. 300-page publication about the exhibition in English. The book will include several essays introducing the topic, including texts by professors Peter Weibel (curator of the exhibition and artistic director of the ZKM) and Ingeborg Reichle (art, culture, and media scholar at the University of Applied Arts Vienna). The publication will document all works in the exhibition extensively with texts and images.

Satellite and touring exhibition
A satellite exhibition will be on show at EnBW’s corporate headquarters in Karlsruhe from approximately beginning of February until July 2022.
An adapted touring version of the BioMedia exhibition will be presented at the Centre des Arts, Enghien-les-Bains, France, from May 12 to July 10, 2022. This collaboration is within the framework of the UNESCO Creative Cities Network.
www.zkm.de