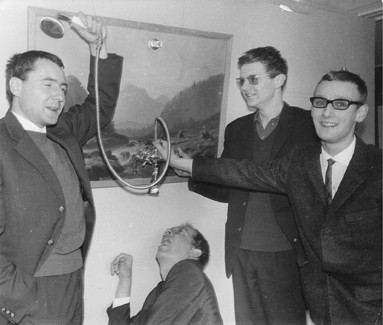 Opening: Friday July 4, 2014, 4 p.m. with a reading by Gerhard Rühm followed by a discussion with Peter Weibel


The current boom in art – participation of public – and what theater-makers like Rimini Protokoll and Hofmann & Lindholm are practicing – the mobilization of the audience – has a history. In 1958 dramaturge and poet Claus Bremer (1924–1996) began designing new approaches to theater performance in Darmstadt and Ulm, which he developed in conjunction with the “open form” in music, the interactive methods of kinetic art and the text constellations of concrete poetry. On July 11, 2014, Claus Bremer would have turned 90 - good occasion to dedicate a solo-exhibition to his work.
The exhibition traces the dramaturgy of Bremer’s development from poet and translator to dramaturge. Between the years 1948 and 1954, Bremer belonged to the “Gruppe der Fragmente”, which stood for the mediation of modern literature, above all, from the USA. In their Revue für moderne Dichtung. Fragmente, they published texts by Ezra Pound, Charles Olson and Henry Miller in Karlsruhe and Freiburg, and were thus far in advance of the contemporary literary scene in the Federal Republic of Germany.
New Rules of the Game
Building on this, in the outgoing 1950s Bremer went on to develop his own forms of text, and consequently counted among the pioneers of visual and concrete poetry. His concrete poetry was published in key anthologies, such as An Anthology of Chance Operations (in collabora-tion with La Monte Young, John Cage, Walter De Maria and many oth-ers, 1961/1963), as well as in his own series of poems in booklet form. At the ZKM | Museum of Contemporary Art these early works are shown separately. The method of combinatorics, constellation and per-mutation which Bremer developed in his poetic works were also ex-tended to his readings. Claus Bremer organized a simultaneous reading (Düsseldorf, 1959) together with Daniel Spoerri and Nusch Bremer, and improvised dialogues with Emmett Williams (Darmstadt, at the end of the 1960s).
Bremer would later transfer these conceptual and performative ele-ments to theater, in which connection, together with others, he would develop the first models of public participation. With Daniel Spoerri, Bremer collected Beispiele für das dynamische Theater (1959), which incorporated the aspect of chance. On Bremer’s suggestion Paul Pört-ner wrote three “Mitspiele”. Bremer was the source of ideas for Werner Ruhnau’s “Spielstraße” at the 1972 Munich Olympic Games.
Furthermore, Bremer worked together with both Wolf Vostell and Bazon Brock, with whom he shared an interest in public inclusion in theater, Happening etc. Here, the exhibition is connected with the show Beuys Brock Vostell (till November 9, 2014) at the ZKM. In 1964, Bremer in-cluded the Happening In Ulm und um Ulm und um Ulm herum. Hap-pening aus 24 verwischten Ereignissen (Die Überlebenden des nackten Einkaufspreises) by Wolf Vostell in the Stadttheater Ulm program. Vos-tell’s works, in turn, inspired Bremer’s collage-theater play (Hände weg von meinem Ferrari, 1967). At the close of the 1950s, Bazon Brock col-laborated with Claus Bremer at the Darmstadt Theater and the theater journal Das neue Forum.
“Interactive” Theater
The focus of Bremer’s work as author and dramaturge in Darmstadt and Ulm in the period between 1952 and 1966 was the participation of the reader and audience in the text or play. Claus Bremer described this “Mitspiel” in the following manner: “the author challenges the actors to participate. Through their acting, actors challenge the audience to par-ticipate. Audience participation challenges actor participation, whose participation, in turn, challenge audience participation etc.” (Claus Bremer, versuche mit festgelegten und nicht festgelegten aufführungen, 1963)
“Please touch!” is the challenge of kinetic art which was to become the model of Bremer’s theater work. “Interjections permitted” were the rules of the game for the participation Scherenschnitt, by Paul Pörtner (1925–1984), which had a premier showing at the Ulm Theater, in 1963. Here, the audience adopts the role of witness during the investigation of a murder case taking place above a hairdresser’s.
The manifestos and results of this new scenic art unveiled the democra-tic utopias of civic activism and direct democracy, as introduced for the first time on a broad scale in the 1960s by Joseph Beuys and student movements. Owing to the fact that the art scene’s market orientation led to Bremer’s work falling into oblivion, it is fitting and important to dedicate and realize a solo-exhibition for this avant-gardist who had been responsible for transferring the moment of action decidedly into the hands of the public. Claus Bremer’s work is presented in programs, artist journals, books and audio-visual documents.
The exhibition supplements the thematic focus of performativity and participation as pursued at the ZKM in such exhibitions as You_ser (2007–2009), Moments. A History of Performance in 10 Acts (2012), Franz Erhard Walther. Space Through Action (2012), Sasha Waltz. Instal-lations Objects Performances (2013), global aCtIVISm (2013/2014) and, currently, on Beuys Brock Vostell (2014).
In conjunction with the exhibition, a collection of Claus Bremer’s key works on theater is scheduled for publication by Alexander Verlag, edit-ed by Peter Weibel and Holger Jost: Claus Bremer: mitspiel. Texte zum Theater 1948-1971.
Claus Bremer (*1924 in Hamburg, †1996 in Forch, near Zurich) was dramaturge, author and translator. Following studies in classical philol-ogy, philosophy, literature and art history in Hamburg and Freiburg, as well as training as an actor, Bremer was actor and assistant director at the Stadttheater Freiburg from 1949 to 1951. From 1948 to 1952, he was also member of the “Gruppe der Fragmente”, in Freiburg.
Initially as director, and later chief dramaturge at the Landestheater Darmstadt between 1952 and 1960, together with Daniel Spoerri, Em-mett Williams and Bazon Brock, Bremer belonged to the “Darmstädter Kreis”. This was followed by two years at the Stadttheater Bern between the years 1960 and 1962; Bremer was dramaturge at the Ulm Theater between 1962 and 1966, and lecturer at the Ulm Academy of Design. He pursued his activities at the theaters of Kassel, Düsseldorf and Zurich from 1966.