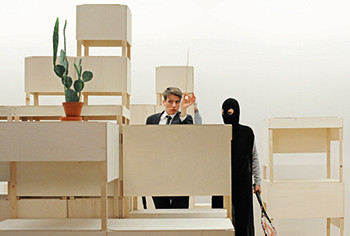 “fm-scenario – the Voice of the Listener” is an inter-media project by Eran Schaerf, in which the Internet is used as the site of production so as to generate further media, such as radio broadcasts, exhibitions and publications.
The starting point of this inter-media project is comprised of Eran Schaerf’s news radio games of the fictive radio program “The Voice of the Listener” (2002). Based on an archive made available by Eran Schaerf, with audio modules the curator Margit Rosen creates a montage that serves Schaerf as a script for a performance-for-the-camera. Resembling the practice of news agencies, the reports from the fm-scenario montage are shown in images and simultaneously transmitted to the ZKM exhibition space. They are then presented by performers in performances-for-the-camera within a scenic exhibition structure.