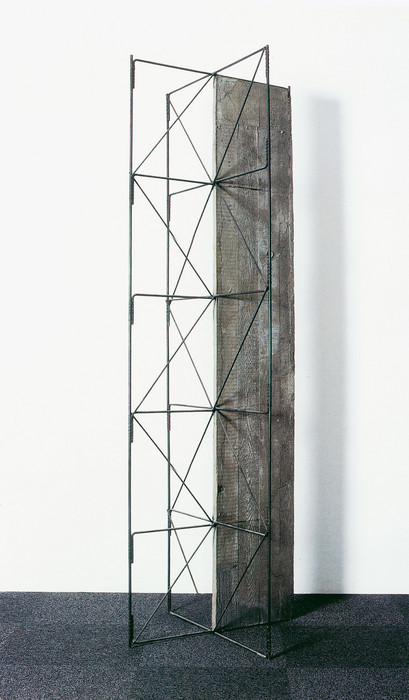 Parallel to the exhibition Rome - Open Painting. The Material Picture in Italy During the 1950s and 1960s, this show of approximately 50 sculptures, mural paintings and studies is dedicated to the work of the Italian artist Giuseppe Uncini (1929-2008). From material painting, he developed a new kind of sculpture: he creates three-dimensional sculpture from surface and structure.

Of shadows in sculpture
The origin of his work goes back to the material paintings of the 1950s, which were mainly formed from cement and iron. The transference of painterly problems having to do with the handling of light and shadows, perception and perspective, onto sculpture is clearly recognizable with Uncini. In his sculpture, the history of shadows in painting (Victor Stoichita) becomes a theme.
Thus Giuseppe Uncini is thus one of the first sculptors to deal with the aspect of shadow as a sculptural problem. With him, shadow becomes a space that exists and does not exist at the same time, a space that is an illusory room, a virtual room that he can make visible only by materializing it. Inspired by this, Uncini recognized that a sculpture forms a new space between itself and its environment: an interstice or interspazio. And this, too, he materializes sculpturally. Thus, a sculpture arises that comprises positive and negative volumes, space and interstitial space, material and immateriality. This expansion and analysis of sculpture in the passage of the material is the result of splitting the painting into panel and image that led to the destruction of the image and the rescue of the panel.

This exhibition was conceived by Giuseppe Uncini shortly before he died in 2008.

Accompanying the exhibition will be a book published by Skira Verlag.
www.zkm.de