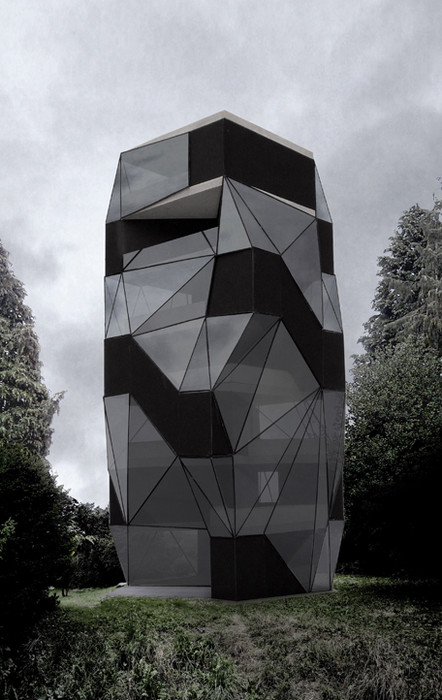 Kein Turm aus Elfenbein: Projekt »Twinning Bookshelf« für Peter Sloterdijk, ©, Foto: Beat Lengen und Ursina Götz
An exhibition on the ZKM_Music Balcony with a presentation of works by students of architecture at the ETH Zurich
Opening on Fri 31 July at 8 p.m. in the exhibition

“Building for Architects” was the thematic title of the semester for 40 students of architecture at the ETH Zurich held in August 2008. Under the directorship of Prof. Gregor Eichinger (architecture and design) the soon-to-be architects were required to complete designs and three-dimensional models especially adapted to the habits and manner of working either of the philosopher and cultural theorist Peter Sloterdijk, or the artist and media theorist Peter Weibel. At the beginning of the semester and together with the two “architects,” each of the latter’s standards and requirements with respect to the buildings were elaborated, and the concrete spatial programmes and locations agreed upon. Both contractors desired a living space that also doubled up as a thought space, a library, which served as a living room and a working area integrated into everyday life. Whereas Peter Sloterdijk envisaged a tower in which to work and to live located in the country, Peter Weibel’s chief concern was a mobile writing table which navigated him towards to his books. The elevator did not convey to the apartment, but rather the apartment was the lift. At the end of the semester, the students discussed and evaluated the project results together with the contractors, which are now presented in the ZKM exhibition “Habitable Libraries”. A catalogue is to be published including all concepts and designs.