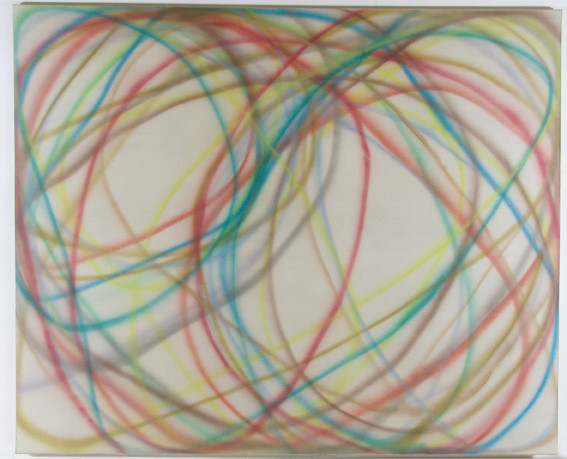 
In the late 1960s, New York's art world was an exciting place. New media such as performance and video art were being discovered and sculpture was rapidly developing in a variety of directions. High Times, Hard Times recalls this era's vibrancy and significance. Experimental, abstract painting played a major role and explored the medium's borders.
The exhibition, which recounts the development from 1967 to 1975 in five different thematic blocks, collects approximately 50 works from 40 artists living and working in New York at the time. Yayoi Kusama, Alan Shields, Lee Lozano, Richard Tuttle, Mary Heilmann, and others evolved-influenced by the social transformation and burning political issues of the late 1960s and early 1970s-works that expressed joy, passion, anger, and the limits of imagination. At the same time, they expanded the conventional concepts of what painting could possibly mean. Nearly half of the abstract painters whose works are presented in High Times, Hard Times are women who were ignored by the influential art critics during their creative period. In the works of these women, the critics saw merely the production of an eccentric expression, and no renewal of the medium, per se. Afro-American artists, such as Al Loving, Joe Overstreet, Howardena Pindell, and Jack Whitten; as well as artists from abroad who lived for a time in New York (Yayoi Kusama, Blinky Palermo, César Paternosto, and Franz Erhard Walther), were likewise denied official recognition.

The exhibition High Times, Hard Times shows images from a time of great transformation: the experiments with surfaces, the picture carrier, space; with installation, video, and performance thus surround and embody the liberal spirit of this era as well as painting's possibilities as medium.

High Times, Hard Times promises the rediscovery of a forgotten slice of art history. Subsequent to »MindFrames. Media Study at Buffalo 1973-1990,« the ZKM | Karlsruhe is again devoting an exhibition to the examination of art's development and the influential trends in the 1960s and 1970s.