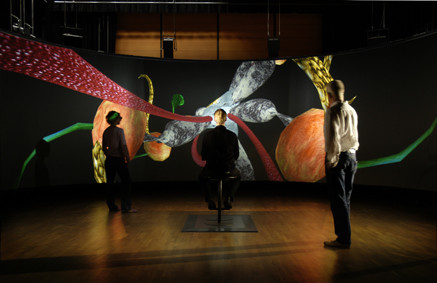 For its twentieth anniversary, the ZKM | Center for Media and Art Karlsruhe will present, its best artistic productions in a lavishly planned review beginning on 10 October 2009.
As a digital Bauhaus and media laboratory with artistic and scientific research, productions, and presentations, ZKM Karlsruhe has answered the rapid developments in communication and information technologies and related social transformations since its founding in 1989.
In its research institutes, more than 500 visiting artists from around the world have produced a great number of highly regarded works, which following their presentation in Karlsruhe, have been honored worldwide in biennales, festivals, and exhibitions thereby decisively contributing to shaping the face of media art for two decades. Through the continuous absorption of these works in the ZKM collection, started in the early 1990s by founding director Heinrich Klotz, Karlsruhe now has one of the most important collections of international media art.

What could be more appropriate for the anniversary of the politically and culturally far sighted founding of the ZKM than presenting its highly regarded productions in a major review and accompanying performances. In this way, the exhibition IMAGINING MEDIA@ZKM aims at no less than reconstructing the international development of media art based on the best productions from the ZKM.
Whereas the ZKM, as an avant-garde laboratory was able to hand over innovative hardware and software for the professional development of artistic works, at the same time, the survival of the works created by its visiting artists are endangered by precisely this rapid progress. Interactive media works, especially, are affected by rapid changes in data architecture, carrying media, and electronic equipment, as their media quality rests on the perfect meshing of software and hardware at the human-machine interface.

Since compelling technological reasons make it impossible to defer the preservation of media art to future generations, the project IMAGINING MEDIA@ZKM has a two-fold task: for one, the best works from ZKM_Production will be reconstructed and made permanently accessible to a broad public in the exhibition IMAGINING MEDIA@ZKM. For another, the methods that allow us to make these works available for future audiences will be analyzed and specified together with the most highly competent international partners in an international conference held at ZKM in October 2009.