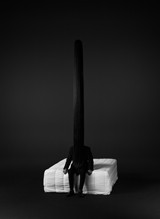 Jürgen Klauke is among the most important performance, photo, and media artists in Germany. The current exhibition at the ZKM | Museum of Contemporary Art—in collaboration with the Museum der Moderne in Salzburg—shows with approximately 110 works a selection of the artist’s most recent creations.

Jürgen Klauke, who lives in Cologne, has achieved pioneering work in the area of Body Art and a critical confrontation with socialized gender norms and behavioral patterns. Beginning in the 1970s, at a time when art and theory discourse were not yet influenced by Body Art and Gender Studies, Klauke, in his work, has consistently examined basic sexual and behavioral patterns pre-shaped by our culture and questioned them with his often provocative photographs. In this, he uses the body—usually his own—in uncompromising ways as a central expressive medium. Above and beyond the theme of sexuality and society, human existence with its omnipresent abysses remains until today at the center of his work. Using everyday materials as the means for staging an image, Jürgen Klauke achieves a concentrated gaze at life’s absurdity and the systematic collision of individual and institution.
An era of artistic occupation with the paranoiac began in the twentieth century with Surrealism and Salvador Dalí’s “paranoiac-critical methods” (in: The Conquest of the Irrational, 1935). According to the psychoanalyst Jacques Lacan, the perception disturbance paranoia does not fail in the classical differentiation between the real and illusion, between reality and representation, but instead, is doomed by interpretation’s primacy in perception: whatever one perceives is constantly interpreted differently than it appears. Nowadays, in the age of ubiquitous data flows, paranoia seemingly influences all psychic and social processes as an undercurrent. The ways of thinking and experiencing in the present can therefore be adequately summed up by the title of a book written by a successful top manager in the hegemonic information and communication technology industry: Only the Paranoid Survive (1996, written by Andrew S. Grove, co-founder of the computer firm Intel and its CEO until 2004).
With work groups such as Formalisierung der Langeweile (1980/1981) and Sonntagsneurosen (1990-1992), Jürgen Klauke was the first to transfer these symptoms of the state of contemporary society into a clear aesthetics. As is well known, the Greek word aisthesis, from which aesthetics is derived, means perception. Klauke’s current work describes the paranoid perception and the paranoid structure of our contemporary world.
Jürgen Klauke is not a photographer, but an artist who uses photography as an instrument to question himself and the world. While he has long set the benchmark in art with his Body Art and artistic questioning of social norms of gender identities and with his complex work groups on the basic questions of human existence, in his new work phase, he goes even further. In minimalistically strict through to excessive, sometimes even surreal scenes, in the new works Klauke reflects on the basic conditions of paranoid existence. The exhibition at the ZKM | Museum of Contemporary art, created in collaboration with the Museum der Moderne in Salzburg, with approximately 200 works shows a selection of Jürgen Klauke’s most recent creation. Among them are the series of large format black-and-white photos Ästhetische Paranoia and Wackelkontakt. These performatively staged photos show the artist as representative of the “self tossed into the world” found in zones of the inarticulable and inexplicable, inviting the beholder to step into these foreboding spaces. In his fascinating photographs, the artist organizes and stages lucid pictorial spaces in which he is absorbed, dissolved, or repeated by the space. Shown for the first time, is also the series Schlachtfelder (battlefields) created especially for the exhibition: a sixteen-meter tableau comprising 144 color photos. In the direct and provocative aesthetics of a contemporary memento mori, Schlachtfelder shows the disputed beauty of the horrors that go on in the hidden realms of the slaughterhouse. The photos hereby reflect on a scope of themes that extends from existential finitude through to the atrocities that occur on a daily basis, and at the same time, refer beyond the level of depicted reality. Complementing this, Klauke also installs two linguistic spaces and an environment with seven plasma screens, revealing a further impressive facet of the media artist’s extensive oeuvre.

Following the exhibition at ZKM | Museum of Contemporary Art, Jürgen Klauke. Ästhetische Paranoia will be shown at the Museum der Moderne in Salzburg (23 October 2010 to 06 March 2011).