just what is it … 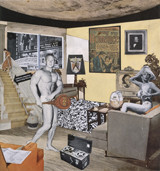 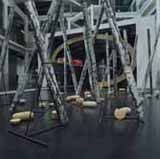 The large scale anniversary exhibition »just what is it ...« will celebrate ten-years of the Museum of Contemporary Art in the Hallenbau industrial building of the ZKM.
On 4 December 1999, the Museum of Contemporary Art opened at the ZKM | Center for Art and Media in Karlsruhe with the goal of presenting key private collections from the German federal state of Baden-Württemberg.
This anniversary offers us the occasion to present an exhibition showcasing the situation that found precisely here in Baden-Württemberg is a concentration of private collectors and collections—reaching beyond the circle of hitherto partners of the Museum of Contemporary Art—unique throughout the federal states, with extraordinary inventories in terms of both quality and quantity. Nowhere else can be found private collections, from the classical modern through to contemporary art, i.e., from Cézanne and the expressionists through to Picasso, from Baumeister to Wols, from Pollock to Rothko, from Warhol and Beuys to Baselitz, Kiefer, Kippenberger, and Rehberger, so extensively laid out and of such high international renown.

»just what is it ...« is the beginning of the title of an incunable of Pop art: the famous collage by Richard Hamilton from 1956, which for one, can be seen on display in the exhibition, marking roughly the midpoint of the era covered. For another, »just what is it ...« serves as impulse for a sequence of wonderful associations that are offered to beholders at the various levels of this exhibition. From a cultural political point of view, too, this exhibition can be considered a highlight of the cultural year 2009/2010 in Baden-Württemberg, especially since it is under the patronage of Prime Minister of State Günther H. Oettinger.

The comprehensive anniversary catalogue mirrors this nationwide-unique concept, and additionally offers a clear picture of the different profiles of the individual exhibitions. Along with numerous illustrations and a chronicle of the Museum of Contemporary Art, which offers an impressive look back at the diverse exhibition program over the past ten years, various essays provide both a retrospective look at the museum’s beginnings and a view ahead to the future. In this, taken up on the one hand are Heinrich Klotz’s and Götz Adriani’s fundamental ideas from the founding era of the Museum of Contemporary Art, while on the other, Götz Adriani and Peter Weibel shed light on individual aspects of the exhibition concept and the collection inventories in Baden-Württemberg. Gregor Jansen casts a glance at the past ten years of the Museum of Contemporary Art, with its varied exhibition program. In addition, the occasion also offers the opportunity to question the status quo of art: Wolfgang Ullrich considers the art developments of the present day and cites them as emerging trends for the future.

For the duration of the exhibition project, the 10-year anniversary will be accompanied by numerous events, which, among others, include a major symposium that likewise takes a look at the development of the museum in the context of its history, present, and future, promising a stimulating discussion about the relationship of public museums and private collections.