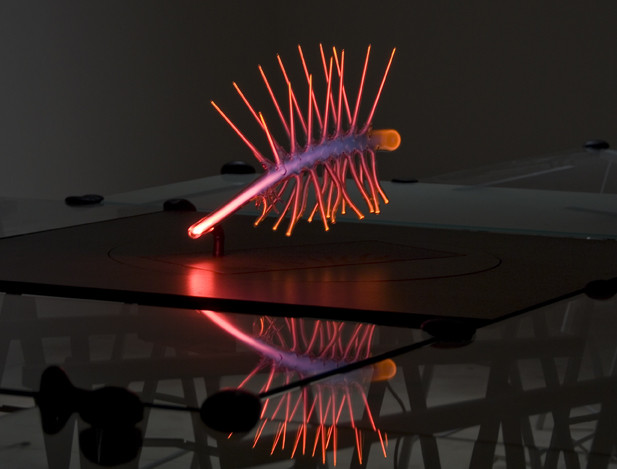 For several years, Martin Walde has succeeded with an unmistakable innovative praxis to involve exhibition viewers in his dynamic installation processes. Martin Walde became internationally recognized first and foremost through his participation in Catherine David’s “documenta X” (1997). His works advanced the concept of sculpture at the cutting edge of material research. The concept of viewing sculpture as a performance in space has meanwhile asserted itself in numerous works – from Franz Erhard Walther through to Erwin Wurm. However, the extension of the concept of sculpture in a new material technology, which completely changes our notion of material is still new territory, which, with a few exceptions and although explored for the first time already during the 1960s has been hardly developed further. It is in this sense that Martin Walde investigates the connection between material and sculpture and, through this, has also evolved a new relationship of sense organs and sense perception using the example of sculpture. At the ZKM, not only is a new version on show of the video installation “Production Limits,” as presented at the international biennale of Seville in 2008, but so also is the group of “Hallucigenia-Sculptures”: thin-walled blown glass units, filled with different gasses and made to illuminate by high frequency technology. With respect to their form, they are derived from pre-Cambriain invertebrate animals, whose imprints were found in Canada, in 1977. Their discoverer, S. C. Morris called these animals “Hallucigenia.” Thus, in Martin Walde’s sculptures art, technology, nature and science are combined.